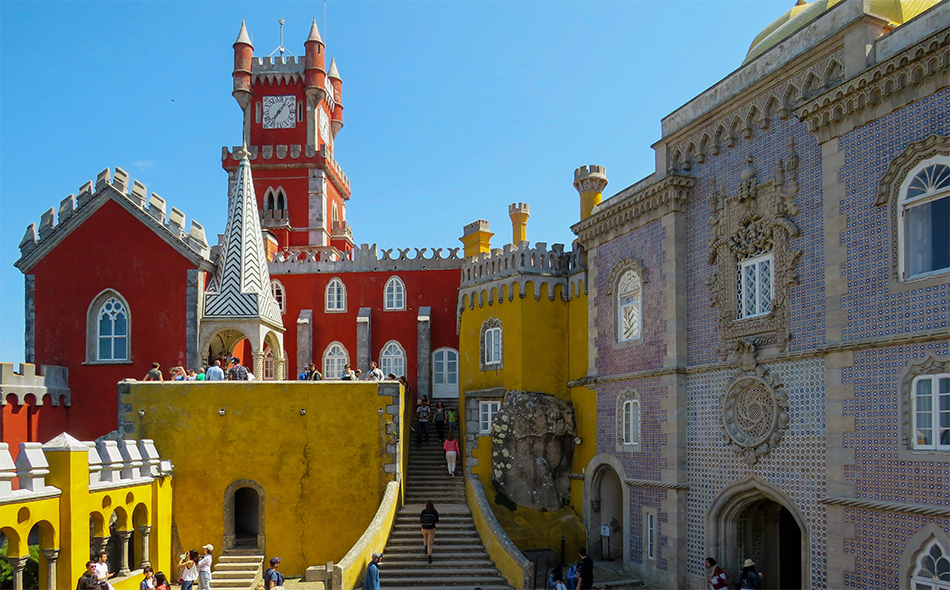 Portugal is a small country on the Iberian Peninsula's Atlantic coast. Thanks to its stunning coastline and countless historical sites, it is also one of Europe's most visited countries. Because of its tiny size, tourists are more likely than their nearby neighbors to view more of the scenery in the same length of time.

The sea of Portugal is steeped in the history of the nautical age, and the sunny beaches of Western Portugal, which best symbolize the temperament of Southern Europe, with sunshine dropping like a handful of stars in the water, become the sea with the most facets.

There is also the exquisite and retro Portuguese old town, which, like an elderly man over half a century old, returns to serenity, not in a rush, delicately operating their lives after experiencing the ups and downs of life. There are also wealthy towns full of attractive hues, and visitors may enjoy the most popular low costs.

Here are some of the most popular attractions in Portugal; check if any of them appeal to you. 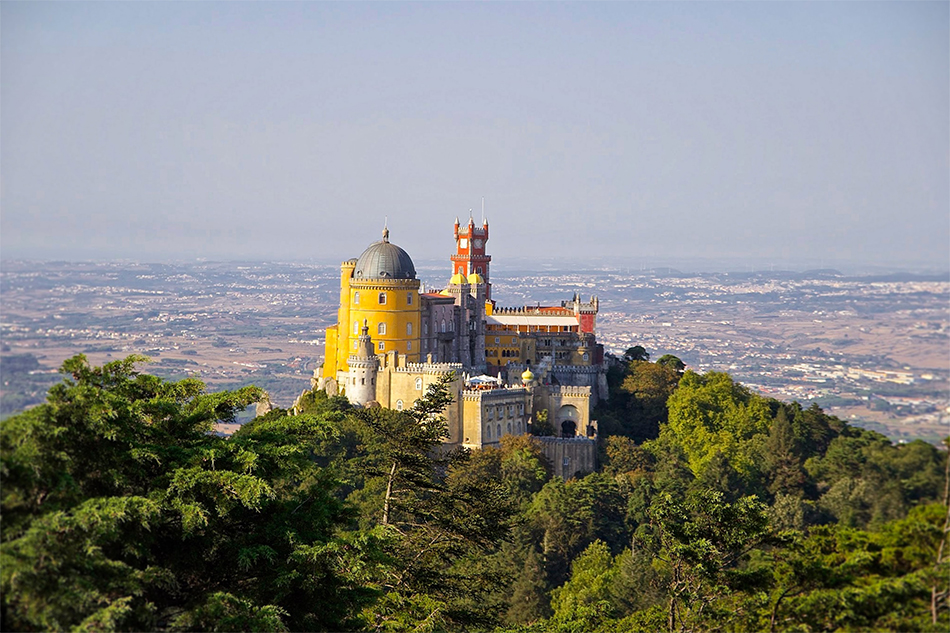 The Pena Palace is a 19th-century Portuguese Romantic palace built on top of a hill in the St. Peter's parish of Sintra, near Lisbon, and is visible from the city on a clear day. It is also a Portuguese National Monument and one of Portugal's Seven Wonders. It is also utilized for state activities by the President of Portugal and other government authorities.

The Pena Palace's general construction is magnificent and attractive, ideal for shooting photos outside the building. At the same time, the interior is intricate and retro-glamorous, and many people opt to enter the palace to see the antiques and architectural style.

2. The Tower of Belém 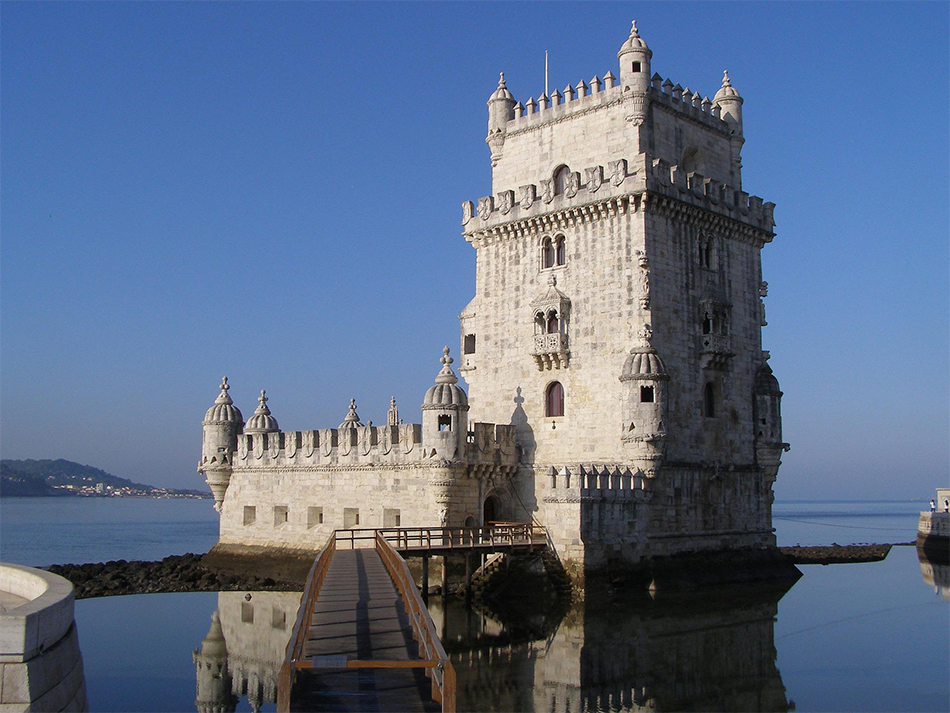 The Tower of Belém is a five-story fortress in Lisbon, Portugal's Belém area. It was erected between 1514 and 1520 during Manuel I's rule to remember Da Gama's successful trip across the world for one week and to defend the port in the Belém area and the Jerónimo Monastery.

The Tower of Belém served as the beginning point for seafarers' trade routes and is home to Lisbon's most prominent landmarks, including the Presidential Palace, the Tower of Belém, and the Jerónimo Monastery, where tourists can also sample some of the most simple egg tarts.

Taking the tram from Baixa to Belém is an excellent alternative, and you can spend most of the day just roaming about. If you wish to go inside the monastery, it recommends keeping an eye on the time, which will allow you to enjoy your visit.

The Castle of St. George is one of the most important historical landmarks and well-known tourist attractions in Lisbon, Portugal's capital.

The view of the entire city of Lisbon and the huge Tejo River from the castle's observation deck is one of the attractions. If your first trip is to St. George's Castle, having taken in the full panorama will provide some context for your next journey, allowing you to arrange your next destination with purpose.

The castle's exterior is stunning and ideal for photographing, so enlist the help of your pals to get some memorable images for you. Of course, wandering around outside the castle, taking a walk, and exploring its architecture and structure is also a fantastic experience.

Louis, I Bridge The name comes from the memory of the then King Louis I. It is a steel arch bridge across the Douro River, connecting Portugal's second largest city, Porto, with the new city of Gaya.

The two-story Louis I Bridge is very majestic, and standing on it and looking around; you can see the romantic and charming towns on both sides of the bridge. Plus, there are performers here. After the effect of more music, standing on the bridge, and looking at the scenery, it looks extra fun and romantic, well worth coming to visit.

The Lisbon Marine Aquarium is an aquarium in Lisbon, Portugal, located in the Park of Nations, formerly the 1998 World's Fair pavilion.

The Oceanarium does not look very big, but it is very elaborate inside. In the central location is a huge tank with marine life. The four corners have creatures representing the Arctic, Indian, Atlantic and Pacific oceans respectively. There are also images and picture materials about these creatures. Families are very suitable to come here to play, especially for children, to see these creatures, will be very surprised, right, and can also learn a lot of biological knowledge.

6. Monument to the Discoverers 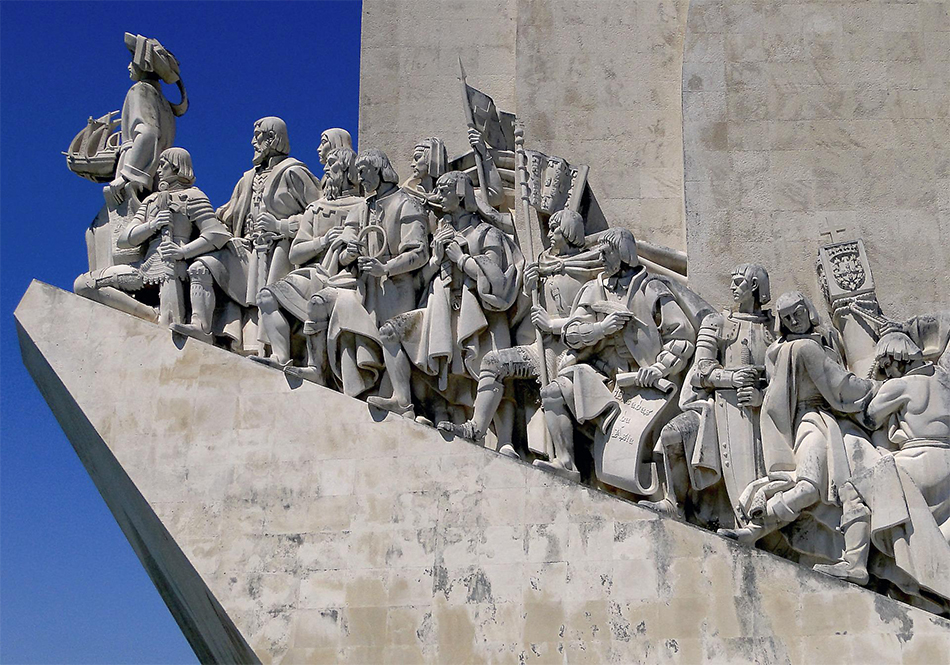 The Monument to the Discoverers, a Portuguese monument commemorating the era of seafaring in the 15th and 16th centuries, is one of the famous landmarks of Lisbon. The Monument of the Discoverer is located on Avenida Brasilia, in the Belém district of Lisbon, Portugal. This is also where the Portuguese sailed during the Age of Sail.

Visitors can see some of the most beautiful beaches in Portugal, and if you pick a sunny afternoon to go to the beach before the sun sets on the coast, the sun is like many stars scattered on the sea, sparkling and beautiful. There are also things you can do to surround yourself with sand sculptures. There are small and medium-sized sand sculpture art festivals on the beach every summer, where you will see real-sand-carved artworks. A little surprise for tourists, if you want to stay here, you don't have to spend time and effort picking a sea view room, you can stay in a comfortable sea view room because it is almost all sea view rooms. 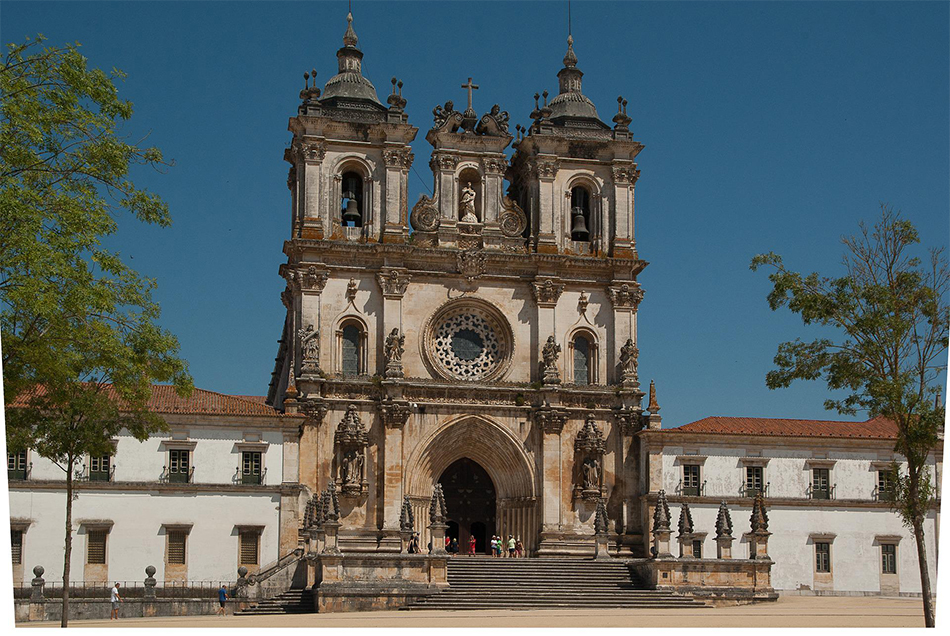 The Monastery of Alcobaça is a Roman Catholic monastery located in the town of Alcobaça, in central Portugal. With a long history, it was founded in 1153 by the first King of Portugal, Afonso Henriques, and has maintained close ties with the Portuguese kings throughout its history.

The church and monastery were among the first Gothic buildings in Portugal. Together with the Santa Cruz Monastery in Coimbra, it is one of the most important medieval monasteries in Portugal.

The monastery is lovely, with magnificent carvings and a fantastic architectural scale. And the love story of Pedro and Ennis is a major theme in the life of this monastery. With their magnificently carved tombs and many stories of the saints, their love story is a work of art and well worth seeing.

located near the historic center of Sintra， Portugal. Listed as a UNESCO World Heritage Site as part of Sintra's cultural landscape, it is also one of Sintra's main tourist attractions. It has the Romantic Regalera Palace, the Regalera Chapel, and a luxurious park with lakes, caves, walls, benches, fountains, and fine architecture. It is also known as the "Palace of the Millionaire Monteiro."

It is also a vast estate, where visitors may spend at least two hours touring. Every corner of the estate is well worth visiting. The town is also clean and has some attractive stores and cafes in the center. 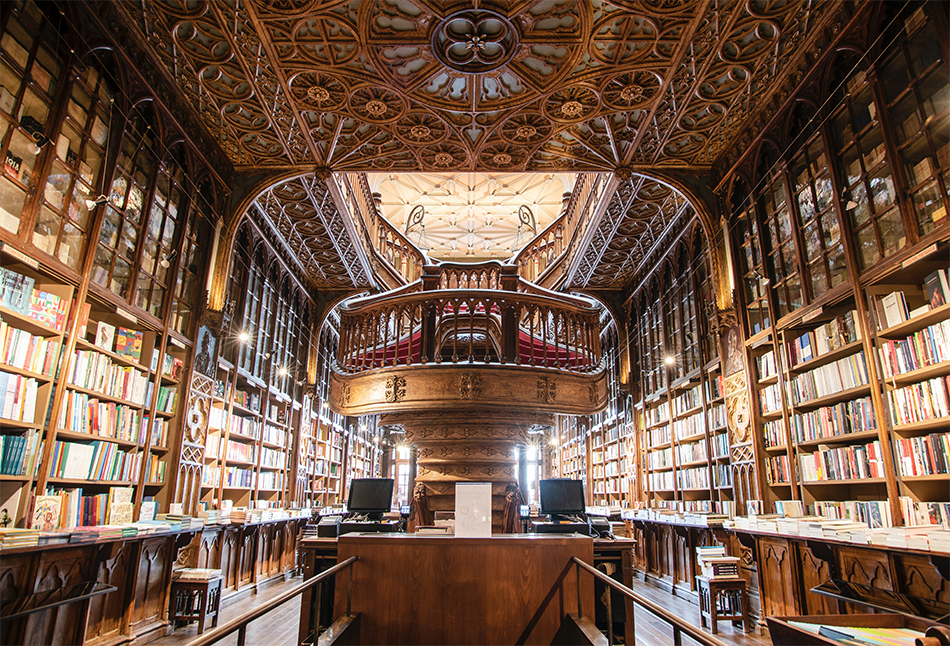 Leroy Bookshop, or Leroy Brothers Bookshop, is a famous bookstore located in Porto, Portugal. It was founded in 1869 and is one of the most historic bookstores in Portugal, and was chosen by Lonely Planet as the third most beautiful bookstore.

The bookstore is located is a neo-Gothic building with a curved staircase. During her stay in Portugal, J.K. Rowling often visited the store for inspiration.

The bookstore has been called the most beautiful bookstore in the world by tourists, and it also has a Chinese translation of an anthology of grape poets, and if you buy a book here, you can offset the admission fee. 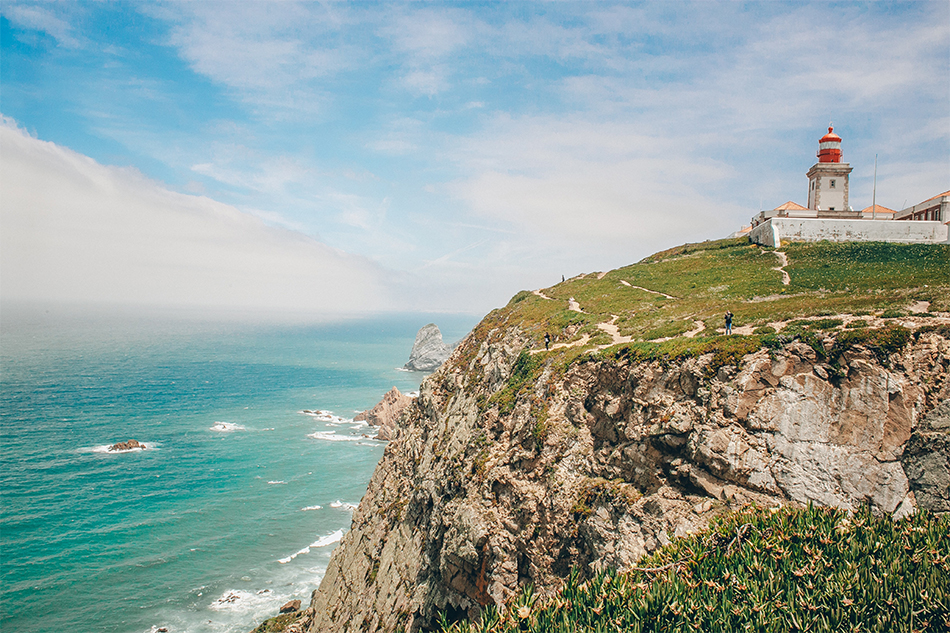 The most southwestern point of the whole Eurasian continent is a peninsula in Portugal facing the Atlantic Ocean. However the westernmost point of Portuguese territory is actually in the Azores. On a 140-meter-high cliff in Cape Roca, a lighthouse and a crucifix facing the sea have been constructed. The monument has the famous Portuguese saying, "The land stops here, the water begins here."

Cape Roca is a one-and-a-half-hour journey from Lisbon along the coast, passing via the famed Portuguese seaport of Cascais along the way.