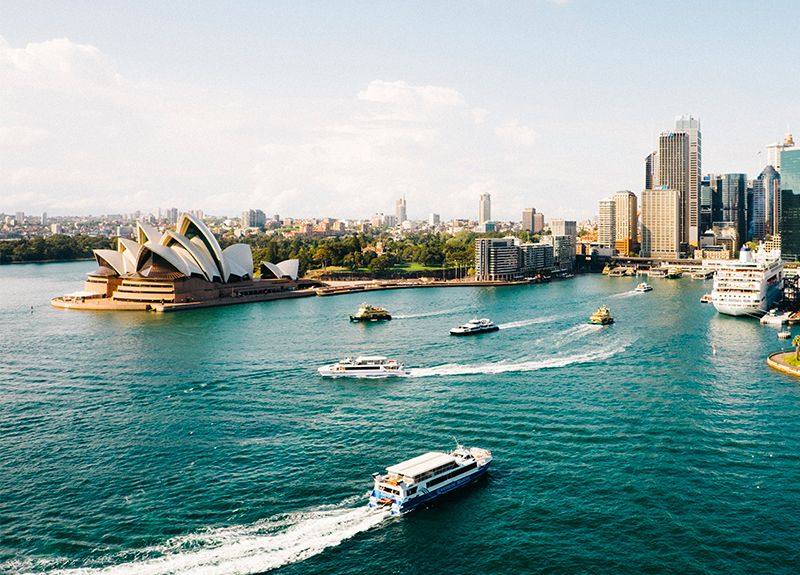 12 Best Things to do in Sydney

Sydney, Australia's oldest, largest, and most attractive city, is nestled in a compelling mix of land and water. Take a ferry ride around the sparkling harbor, see the white sails of the Opera House glistening in the sunlight, and marvel at the sweeping arch of the Harbor Bridge, and you'll understand why Sydney is one of the world's most beautiful cities.

1. Check out the Sydney Opera House 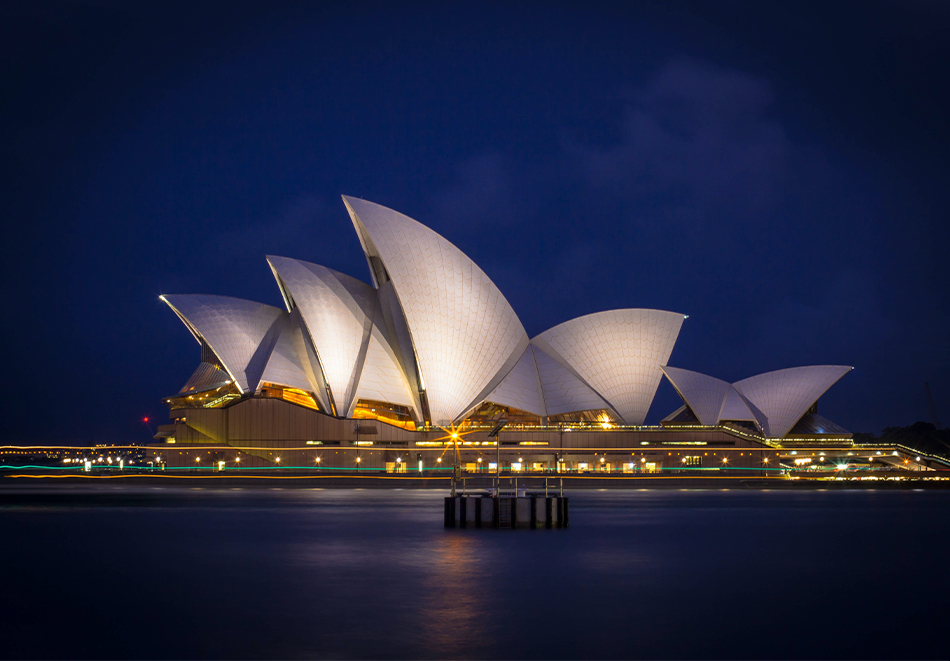 The Sydney Opera House, one of Australia's most famous landmarks, is one of the world's most prestigious performing arts centers. It is located in Sydney's Central Business District, on the waterfront of Bennelong Point, and is surrounded by the beautiful scenery of Sydney Harbor and the Royal Botanic Gardens.

The Sydney Opera House, considered a 20th-century architectural masterpiece, was designed and built by architect Jørn Utzon to resemble a massive sailing ship. The Joan Sutherland Theater, Drama Theater, the multi-purpose Utzon Room, and the Concert Hall, which houses the world's largest mechanical tracker-action organ, are among the many venues housed within the structure.

The Forecourt, an open-air venue that hosts many outdoor performances, is also part of the Sydney Opera House. There is also a recording studio, bars, cafes, restaurants, retail shops, and performance venues. 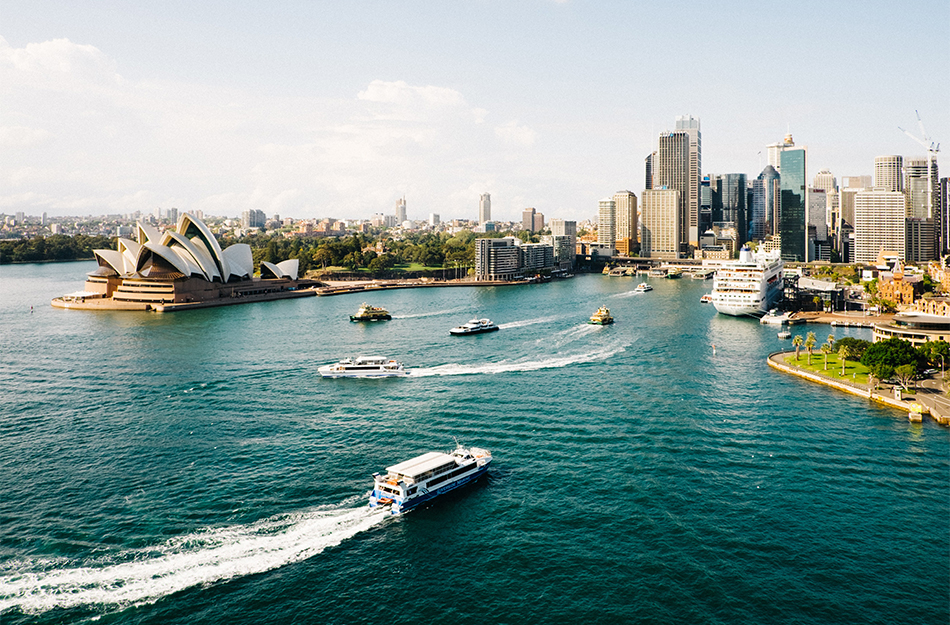 The iconic Sydney Harbor Bridge serves to cross the harbor and is a travel destination for daring visitors. The bridge, finished in 1932, has an arch that stands 134 meters above sea level and spans 503 meters.

The city opened the Bridge Climb attraction in 1998, allowing brave visitors to ascend to the top of the arch. During the three-and-a-half-hour climb and descent, participants are outfitted with protective clothing and are attached to a wire lifeline.

The Pylon Lookout Museum is a popular attraction for a less adventurous view from the bridge.

3. Walk along the Rocks

The Rocks is the city's oldest neighborhood, located between the Harbor Bridge and the northern edge of Sydney's Central Business District. The Rocks, named after its rocky shore, was Australia's first permanent European settlement and the site of its convict history.

By the late 1800s, the neighborhood had degenerated into a slum teeming with taverns and brothels, with crime rife on the narrow streets. The city began a massive restoration project in the 1970s to save the district's historic homes and warehouses. The redeveloped neighborhood is a popular tourist destination, complete with art galleries, chic boutiques, trendy restaurants, and souvenir shops.

The Royal Botanic Gardens, established in 1816, is sandwiched between the Sydney Opera House and The Domain public green space. The urban park, which overlooks the harbor, contains over 7,500 plant species, many of which are native to Australia.

The Tropical Center, which houses plants in pyramid-shaped greenhouses, and the Rare and Threatened Species Garden, which includes an ancient Wollemi Pine, a genus of tree that dates back 200 million years, are both highlights. There is no admission fee to the park, and free guided tours are also available. 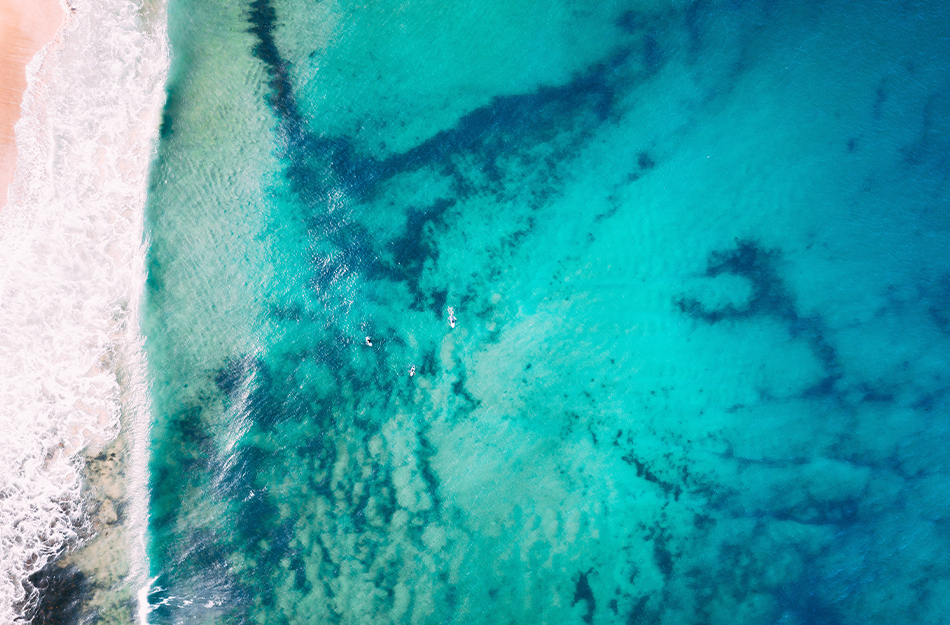 Sydney is well-known for its stunning beaches. Many sheltered coves with calm water and sugary sands are tucked around the harbor.

You don't have to go far from the CBD to find a beautiful stretch of sand and sea. With great surf, a buzzing café scene, and a cosmopolitan vibe, Bondi Beach is less than a 15-minute drive from the city. Take the coastal walk from Bondi to Coogee Beach for spectacular ocean views.

If you're taking public transportation, Cronulla is the only beach that can be reached by train from the city, and Manly Beach is only a 30-minute ferry ride from Circular Quay. Swim in the surf or the netted ocean pool, take a surf lesson, or stroll down the beachfront promenade, stopping in at the excellent shops and restaurants.

Surfers will find some fantastic breaks further north of the city at Collaroy, Dee Why, and Narrabeen.

6. Zoom up the Sydney Tower Eye

The Sydney Tower is the city's tallest structure, rising 1,073 feet above sea level and providing 360-degree views of the compact metropolis, harbor, and surrounding countryside. The building, designed by architect Donald Crone, first opened to the public in 1981.

The Sydney Tower Eye, which stands 260 meters above ground level, has an enclosed viewing platform that completely encircles the structure. Tourists enjoy zooming up the Sydney Tower Eye, one of the most popular things to do in Sydney's CBD. Visitors can take express lifts to the observation deck at the top or to SKYWALK, an alfresco glass-floor viewing platform ideal for sightseeing. 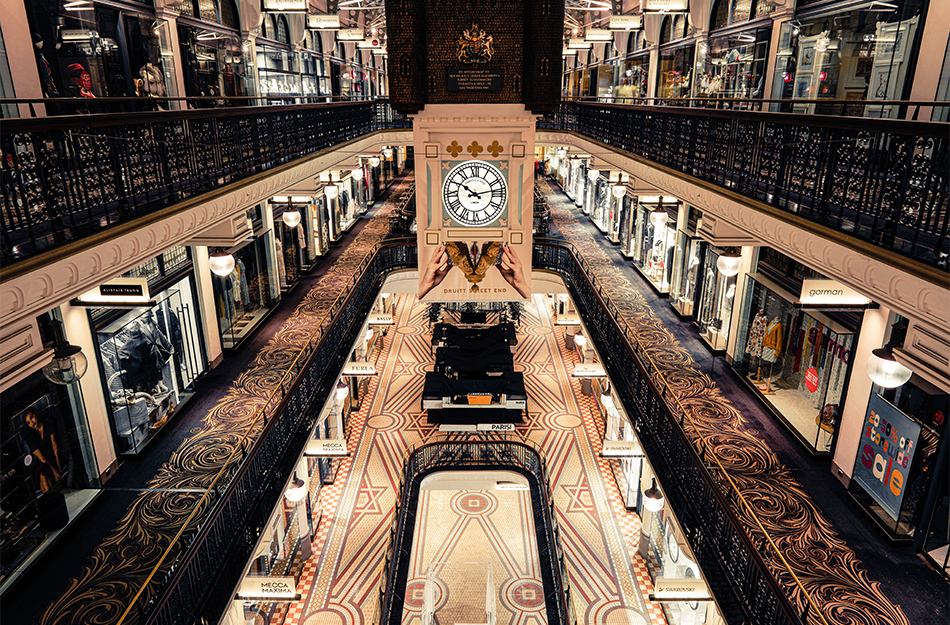 The Queen Victoria Building, also known as the QVB, is a five-story shopping center that spans an entire city block and houses nearly 200 retailers. The building was designed as a marketplace and concert hall by architect George McRae in 1898.

Later, tenants used the building for office space, and it began to deteriorate during the Great Depression. QVB has now been restored to its former glory and function. The QVB is a stunning example of the Romanesque Revival style popularized during Queen Victoria's reign, with a large glass dome sheathed in copper, ornamental cast-iron railings, and numerous stained glass windows. 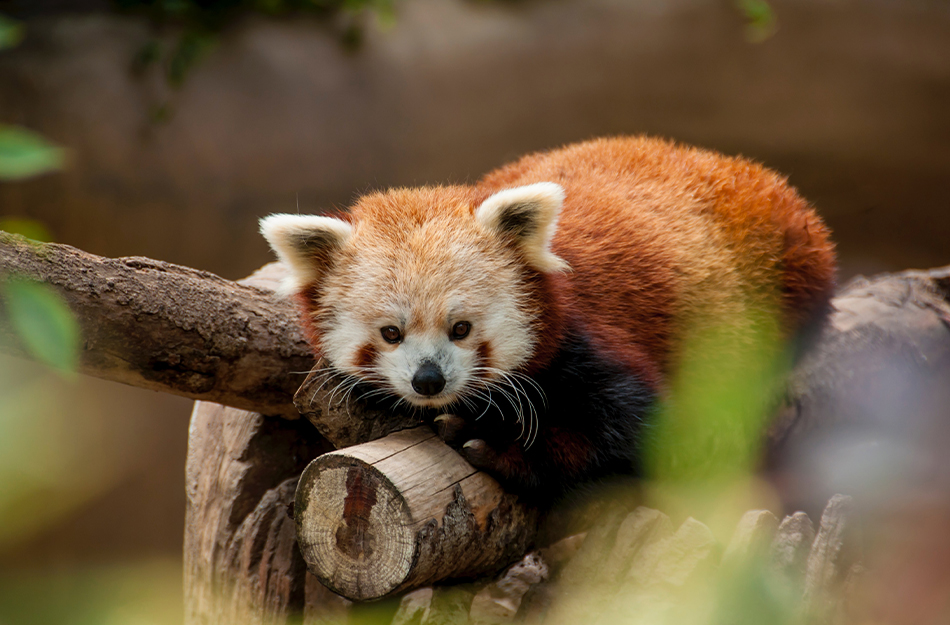 The world-class Taronga Zoo, located on the harbor's hillsides in Sydney's Mosman neighborhood, gives visitors a close-up view of Australia's indigenous creatures as well as animals from all over the world. The zoo's Roar and Snore experience, which allows visitors to stay overnight to observe nocturnal fauna, and the Nura Diya tour, which features guides who share stories about Aboriginal life, are both highlights.

Although the zoo is accessible by car or bus, most visitors prefer to take a short ferry ride to the nearest harbor. The zoo's entrance is reached via a short gondola ride from there. Zoo tickets that include ferry and gondola rides are available.

In the city's heart, George Street is Australia's oldest street. It was once a nameless track used by convicts to fetch water supplies, but it is now one of the city's major traffic arteries. It's worth exploring to get a sense of the pulse of this vibrant city and to peruse the shops.

The nearby Sydney Town Hall (1869) is a significant city landmark with a fusion of architectural styles. The neo-Gothic St. Andrew's Cathedral, completed and consecrated in 1868, is another architectural highlight. 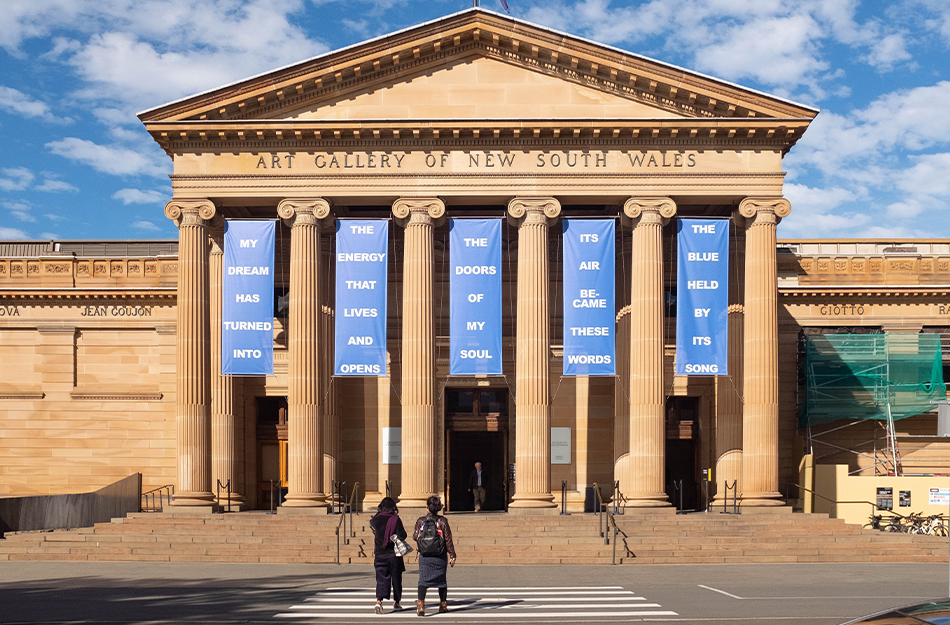 The excellent Art Gallery of New South Wales is located in The Domain, not far from St Mary's Cathedral. It is one of the country's largest and best museums, with a collection of more than 40,000 paintings, photographs, sketches, and sculptures.

The large museum, founded in 1872, is housed in the stately, neo-classical Vernon Building, which is surrounded by lovely grassland. Incredible European, Asian, and Australian artworks may be found in its wide light-filled galleries, with large parts dedicated to amazing Indigenous artists from across the country. 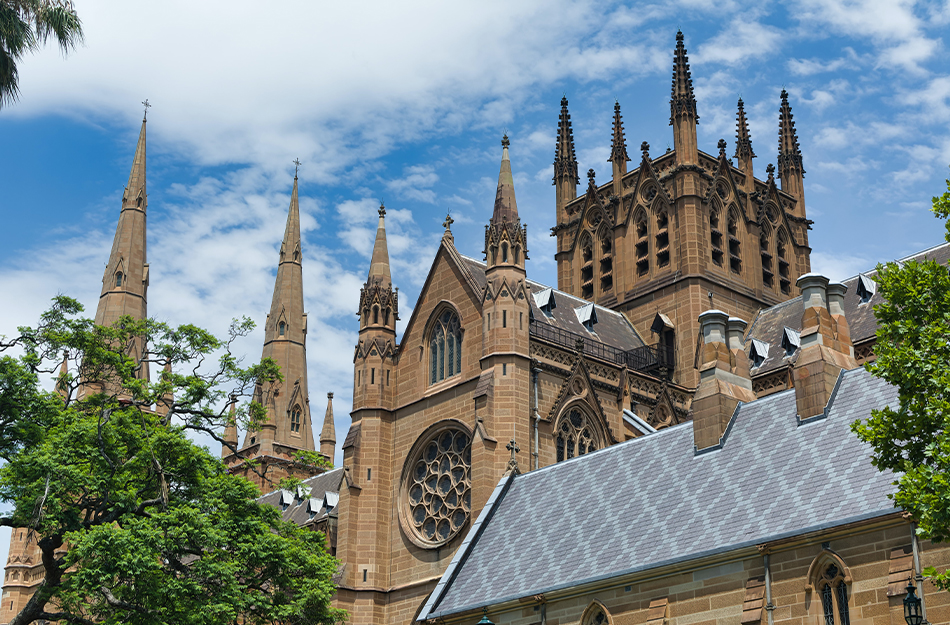 St. Mary's Cathedral, located between Hyde Park and The Domain, is one of Sydney's most recognizable landmarks and sights. Its stunning architecture, with two twin spires towering above a charming neo-Gothic front, is just a short walk from the town.

It was built between 1866 and 1928 and is modeled after both Lincoln Cathedral in the United Kingdom and Notre-Dame Cathedral in Paris, with stunning rose windows, magnificent arches, transepts, and flying buttresses. Its colossal interior is equally impressive. The gorgeous sanctuary, chapels, and statues are painted in a magnificent rainbow of pretty colors by the light beaming through its stained glass windows.

12. Enjoy a Day at Darling Harbor

Once home to Sydney's industrial docks and piers, Darling Harbor was renovated in the 1980s, focusing on culture and tourism. The Australian National Maritime Museum, the Sydney Aquarium, the Aboriginal Center, and an IMAX theater with the world's most giant screen are all located in this district, directly close to the Central Business District.

A bowling alley, laser tag, and a jet flight simulator are available in the family-friendly Harbourside Shopping Centre. The waterfront's east side is lined with luxury boutiques, bars, and restaurants.