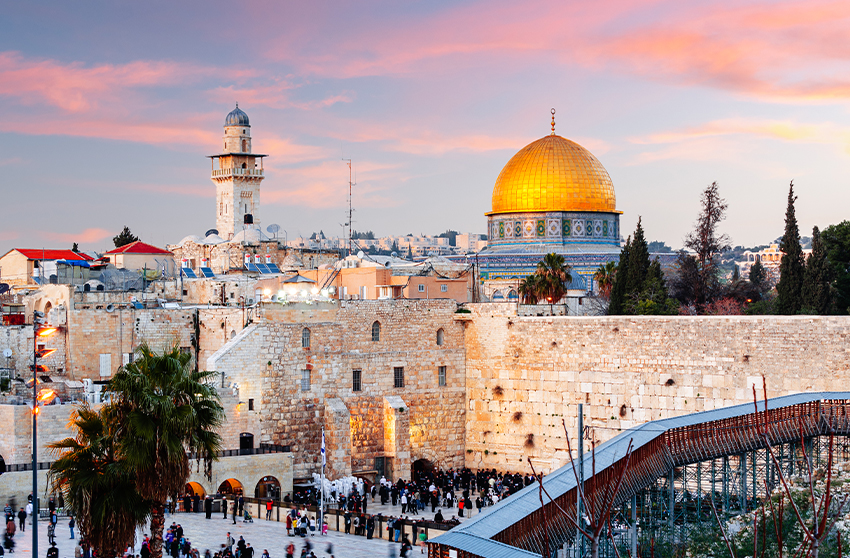 What kind of country is this?

Can be occupied 38 times in 3,000 years of history, and still standing;

What kind of land is this?

What kind of holy land is this?

What kind of nation is this?

Can wander in 2000 years, be slaughtered by tens of millions, scattered in dozens of countries, but can eventually return to the "promised land", rebuild their homes!

Israel is located at the border of the three continents of Asia, Europe and Africa. Its special geographical location has created its unique culture and history. The last thing to travel in such areas is the surprise and surprise arising from the collision of different "conflicts".

Israel is astonishingly diverse for a country the size of New Jersey. Almost anywhere in this Middle Eastern country, you'll come across historic religious sites mentioned in the Bible. There are also ancient Roman ruins and other archeological ruins dating back thousands of years.

If antiques aren't your thing, Israel has some beautiful beaches, great outdoor activities, and a sophisticated cultural scene. Here's a rundown of the best places to visit in Israel: 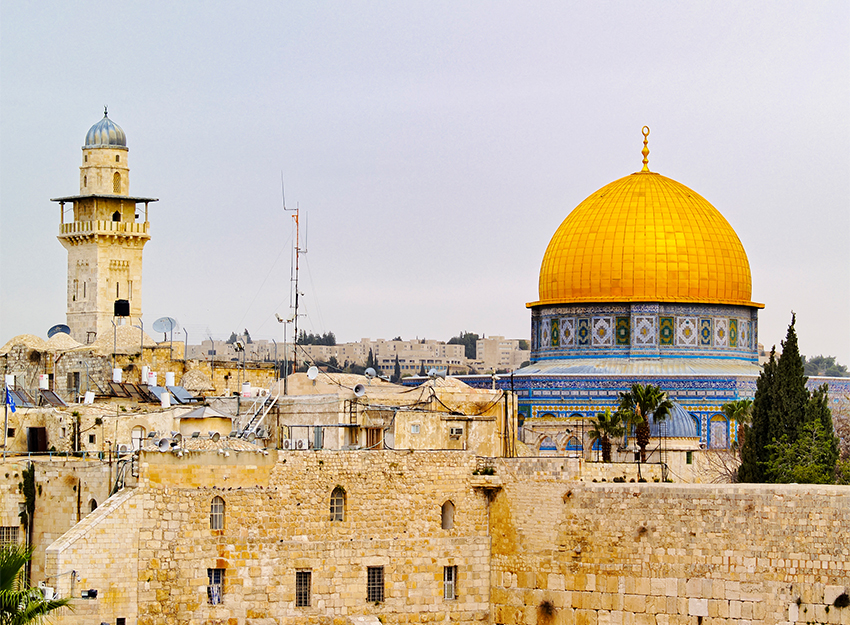 Jerusalem, one of the world's oldest cities, is considered a holy city by the three major religions of Judaism, Christianity, and Islam. Jerusalem, located high in the Judean Mountains, was previously inhabited by the Jebusite tribe until King David of the Israelites captured it and made it his capital city 3,000 years ago.

The city has been besieged, attacked, and captured numerous times over the centuries by opposing religious and political powers. Despite time and warfare, Jerusalem's many historic sites have been well preserved, making it one of the world's most beautiful and fascinating cities.

Its historic Old City is split into four sections: Jewish, Christian, Armenian, and Muslim. You can follow in Jesus' footsteps on the Via Dolorosa, pray at the Western Wall, visit the Church of the Holy Sepulcher, where Christians believe Jesus is buried, and tour the Tower of David, a medieval citadel. Other significant Temple Mount sites include the Dome of the Rock and the Al-Aqsa Mosque. Popular attractions outside the Old City include the Garden Tomb, Hezekiah's Tunnels, Jerusalem Botanical Gardens, and the Biblical Zoo. 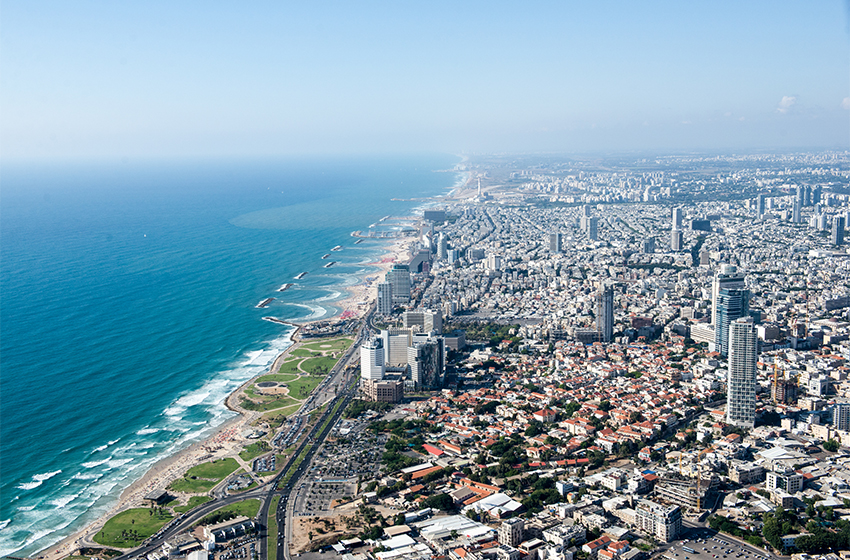 Tel Aviv, the country's second-largest city, serves as the country's financial center. Many people feel that Israel seems to have only war and explosions.But in my opinion, the world needs us to feel it for ourselves, and not to give up eating for fear of choking.In Israel's top 30 GDP per capita (with China 100), many religious stories take place, a place where milk and honey flow.Here, what I see, is a very tender Tel Aviv.

It is the "capital" of Bauhaus architecture worldwide. People who are keen on this architectural style can participate in the White City Day Tour. There are about 2,500 Bauhaus-style buildings in White City , which were listed as a UNESCO World Heritage Site in 2003. 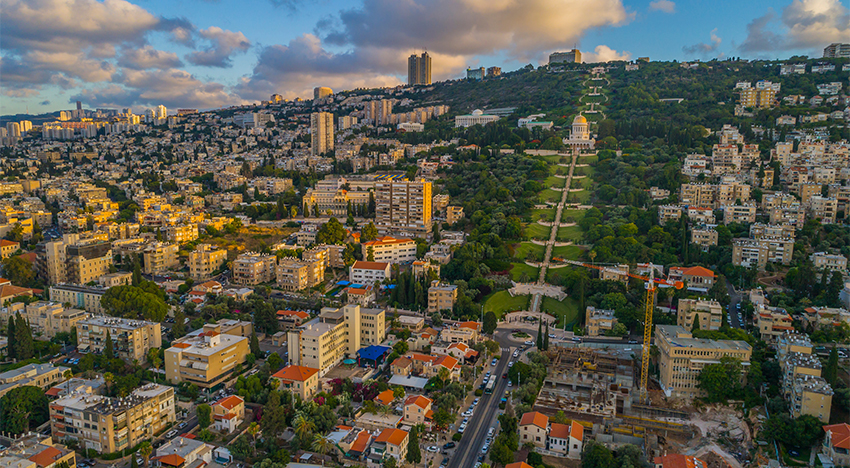 Although Israel is a Jewish state, another religion draws visitors to Haifa, the country's third-largest city. The Baha'i World Center, with its shrine to the Bab and beautiful gardens, is the main tourist attraction in this lovely city on the Mediterranean.

Haifa is primarily a port and industrial city, but it has a diverse range of attractions. The Israel Museum of Science, Technology, and Space is its most popular attraction. The arts are also important in Ein Hod, which is home to approximately 100 artists and craftspeople. Haifa has beautiful beaches and is an excellent location for surfing and sailing. 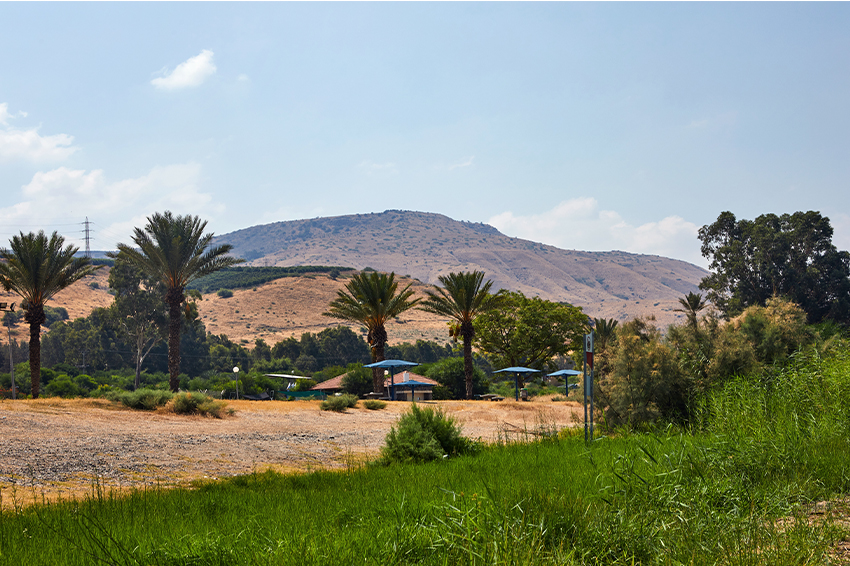 Tiberia is a mountain city on the west bank of Lake Galilee, and visitors are mostly attracted by the magnificent natural scenery of Galilee.Tiberia is regarded as a holy city in Jerusalem, and besides the natural landscape, religious relics and architecture deserve stopping.The old city is at the same height as Lake Galilee, 210 meters below sea level, while the new city is much higher in altitude, with a large drop. People standing in the city can capture the different scenery of Lake Galilee. 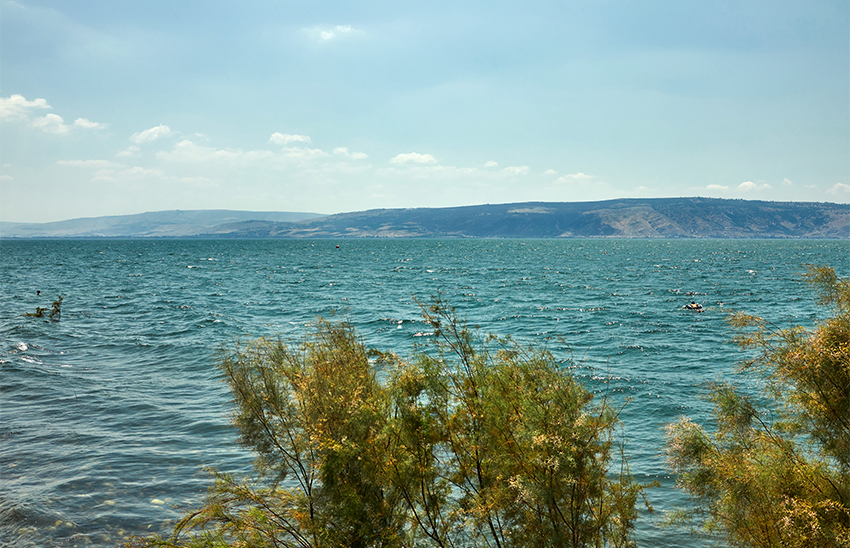 The Sea of Galilee (Hebrew: Yam Kinneret) is the largest freshwater lake in Israel and the lowest freshwater lake on earth.On the shore of Hubei is the picturesque Golan Heights, also a desirable place for outdoor travelers.There are many histories and sites around the lake, such as the Five Cake and Two Fish Church (Church of the Multiplication) —— from the story that Jesus fed 5,000 people with five cakes and two fish on the Galilee mission.Mosaic fish cakes also appear on various tourist crafts; and Capernaum , the remains of a synagogue.

It's a popular destination for Christian pilgrims interested in seeing where Jesus walked on water. Another attraction is the 65-kilometer (40-mile) long Jesus Hiking Trail, which visits locations where Jesus worked during his ministry. People travel from all over the world to be baptized at the point where the lake empties into the Jordan River. 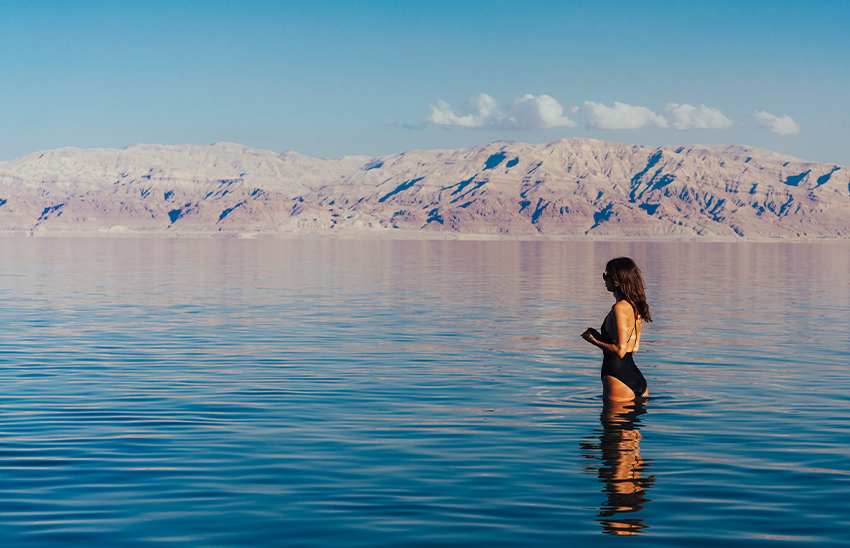 There's a reason why the Dead Sea got its name. It's nearly ten times as salty as the ocean, making it an unforgiving environment for life. It also has the lowest elevation on land, at 400 meters (1,400 feet) below sea level.

The salt and minerals in its water have been used in cosmetics for thousands of years. The Dead Sea water and mud have medically proven benefits, including long-term remission of severe skin diseases and joint problems. All of the luxury hotels along the coast have health spas, which are frequently fully booked for months in advance. 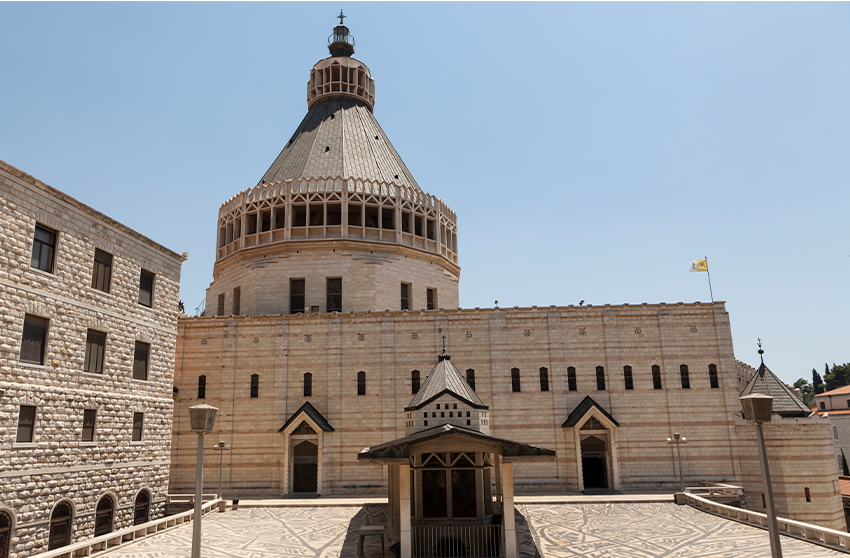 Nazareth, the largest city in Galilee, is known as the Arab capital of Israel because its residents are mostly Arab Israeli citizens. Nazareth is a Christian pilgrimage destination because the Bible says it was the home of Joseph and Mary, and thus Jesus' childhood home.

The angel Gabriel appeared to Mary in this ancient city to tell her she would give birth to Jesus. As a result, Nazareth is sometimes referred to as the "Cradle of Christianity." The Church of the Annunciation, the largest Catholic church in the Middle East, is located in its Old City.

Take time to stroll through the picturesque streets and visit the vibrant local market.The cloth in the market is dazzling, the delicacies move, and the art and souvenirs are dazzling. 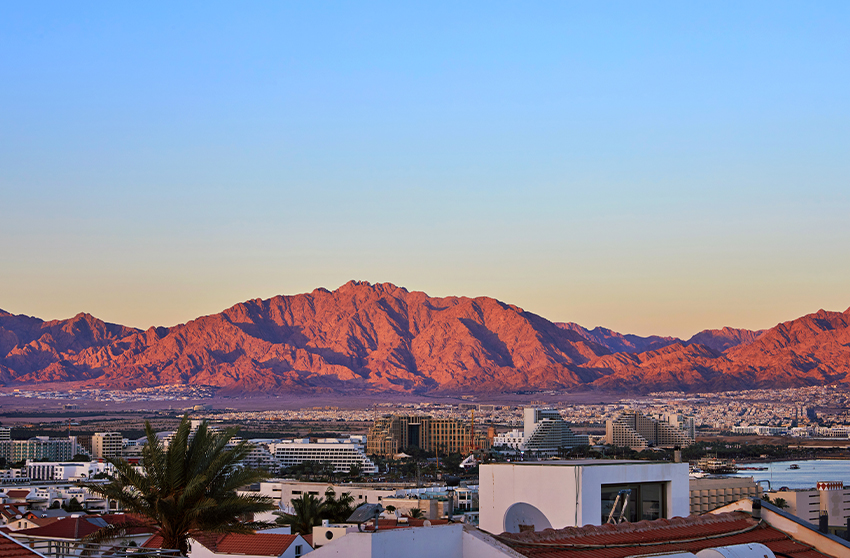 Eilat is an ancient city on the Red Sea that has been used as a port since King Solomon's time. Eilat is the southernmost city in Israel. Its luxurious beaches and arid climate contribute to its status as a major resort city. It has some of the best diving in the world, owing to the beautiful coral reef that is located here.

Expect to see an incredible variety of sea life if you dive. Other attractions include King City, a high-tech Bible-based family theme park; bird watching – Eilat is on the main migration route between Europe and Africa; and Timna Valley Park, which contains Solomon's Pillars as well as the world's oldest copper mine. 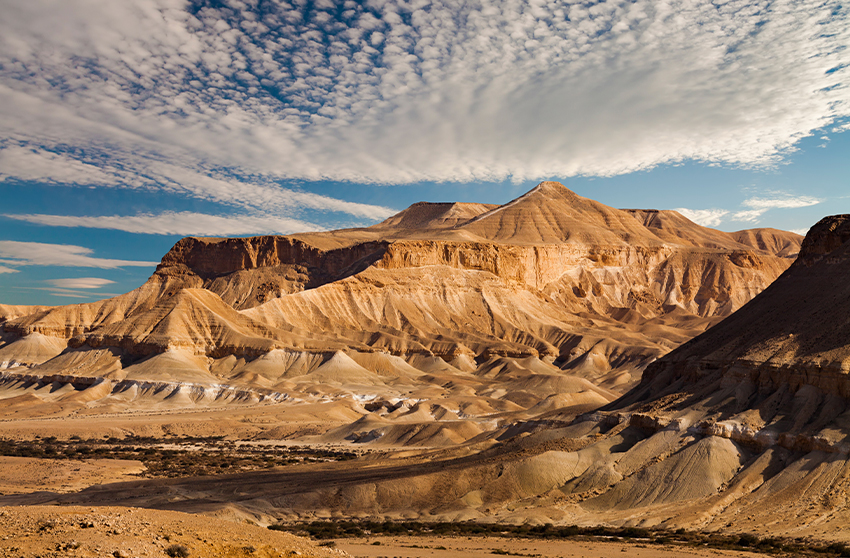 Ramon Crater is the largest of the Negev Desert's three erosion craters. The geological landform is thought to have formed millions of years ago when the ocean began to recede. It took another million years for it to become the crater that it is today.

The colorful crater is more than 450 meters (1,500 feet) deep and nearly 40 kilometers (25 miles) long, surrounded by mountains. The world's largest erosion crater is open to the public, and you can explore it by hiking, biking, or driving through it. Campers may enjoy staying at a Bedouin-run campsite. 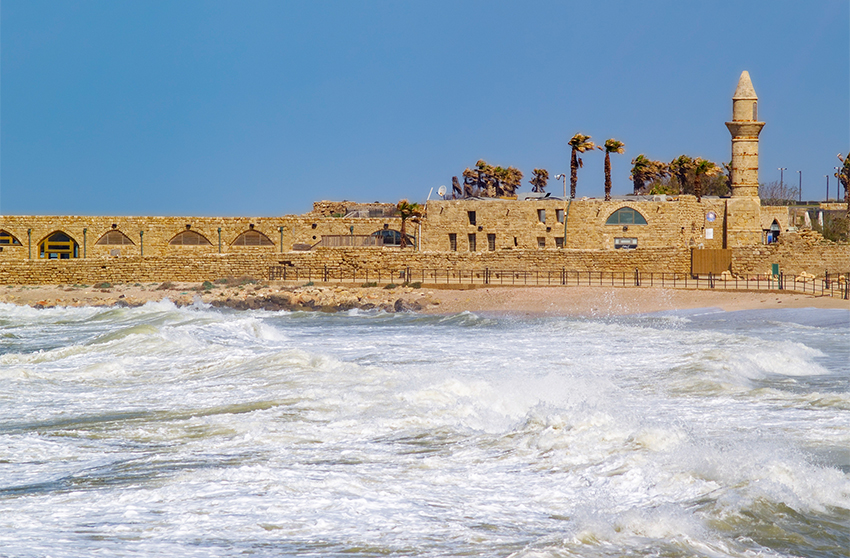 Caesarea is both old and new. Herod the Great founded it in honor of Caesar Augustus, who gave him the city. It became the only city in Israel to be governed by a private corporation in 1952. The Antiquities Park contains ruins from Herod's extensive building campaign.

You can also find more ruins by walking through the old city, or you can watch a horse race re-enactment at the hippodrome. The new Caesarea is sleek and sophisticated. Perhaps you'd like to sunbathe on the sandy beaches, play golf, or attend the annual jazz festival.