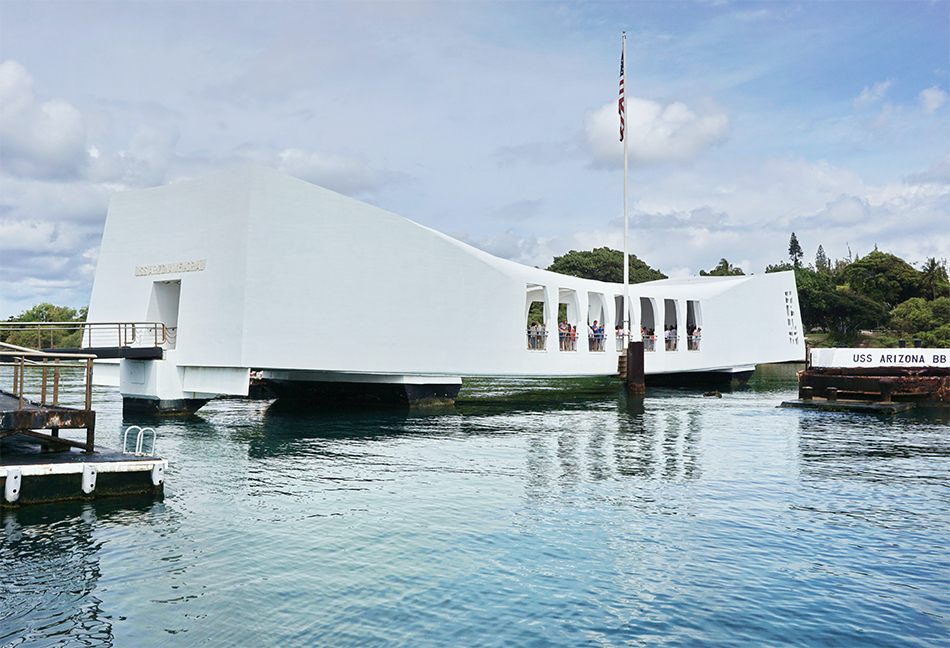 The largest natural harbor in Hawaii, Pearl Harbor is named after the many pearls that were previously gathered from its depths. While it is still a working naval facility, it is also a National Historic Landmark that is home to major World War II Valor in the Pacific Monument sites, including memorials to the USS Arizona, USS Oklahoma, and USS Utah, as well as Battleship Row and Ford Island.

The National Park Service operates the Pearl Harbor Visitor Center, which is free and open to the public. Tourists can read about the devastating 1941 raid, as well as other military and ecological history of the harbor, here. This is also where visits to the USS Arizona and the Pacific Aviation Museum on Ford Island depart from. A movie presentation, historic images, two hangars with various WWII aircraft, and flight simulators that allow visitors to experience takeoff and landing on an aircraft carrier are all included in this intriguing museum. 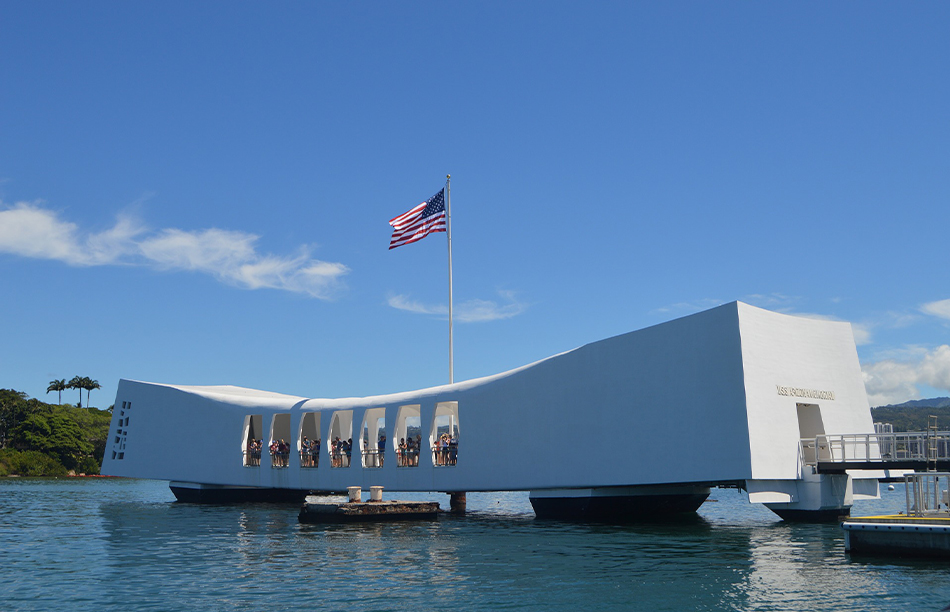 The USS Arizona Memorial is Hawaii's most popular tourist destination and one of the five locations in Pearl Harbor that make up the World War II Valor in the Pacific National Monument. The memorial floats above the submerged remnants of the USS Arizona, which was sunk on December 7, 1941, along with 1,177 crew members.

The memorial's free tours begin with a film on the attack and its historical background at the Pearl Harbor Visitor Center, after which guests board a USS Arizona. They arrive in a navy boat and are taken to the memorial. The large marble wall, which is carved with the names of all those who died when the ship was bombed, may be seen here. Due to the popularity of the trip, tourists should arrive early to get tickets or reserve a space in advance.

3. Enjoy the Beaches and Sights of Waikiki

This Honolulu area is noted for its luxurious resorts, entertainment, shopping, and dining, as well as its beautiful beaches. It is also known as the birthplace of Olympic gold winner Duke Kahanamoku, a swimmer and surfing teacher who is known as the "Father of Modern Surfing." The sport is so loved here that the markers along the Waikiki Historic Trail are fashioned of surfboards, in addition to a statue of Duke.

The Royal Hawaiian Center and International Marketplace are popular gathering spots, while Kuhio and Kalakaua Avenues are home to the majority of Waikiki's restaurants and retailers. On the Waikiki Beach Walk, there are also plenty of cafés and nighttime entertainment. 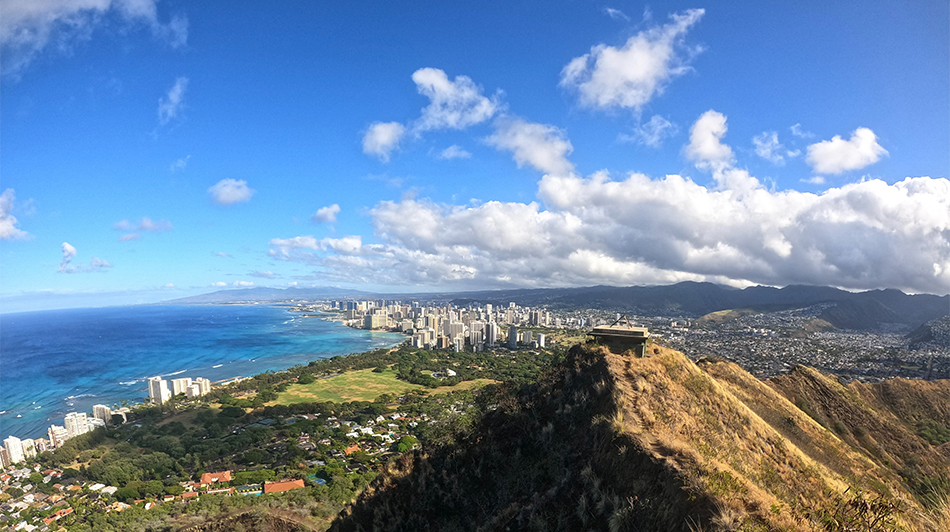 Diamond Head, the most iconic of Hawaii's natural features, has a distinct profile. This historic mountain, which is located on the eastern edge of Waikiki's coastline, was formerly a key part of the island's coastal defense. Visitors can now hike the steep trail that rises 560 feet from the crater floor to the summit in just 0.8 miles.

A massive lighthouse, bunkers, and the Fire Control Station that controlled artillery at Fort Ruger and Waikiki are all located at the summit of Diamond Head Crater, which was built in 1917. For many visitors, the stunning panoramic view of the seashore below is the reward for the difficult uphill trek. Those wishing to walk the trail should bring plenty of water and strong boots. 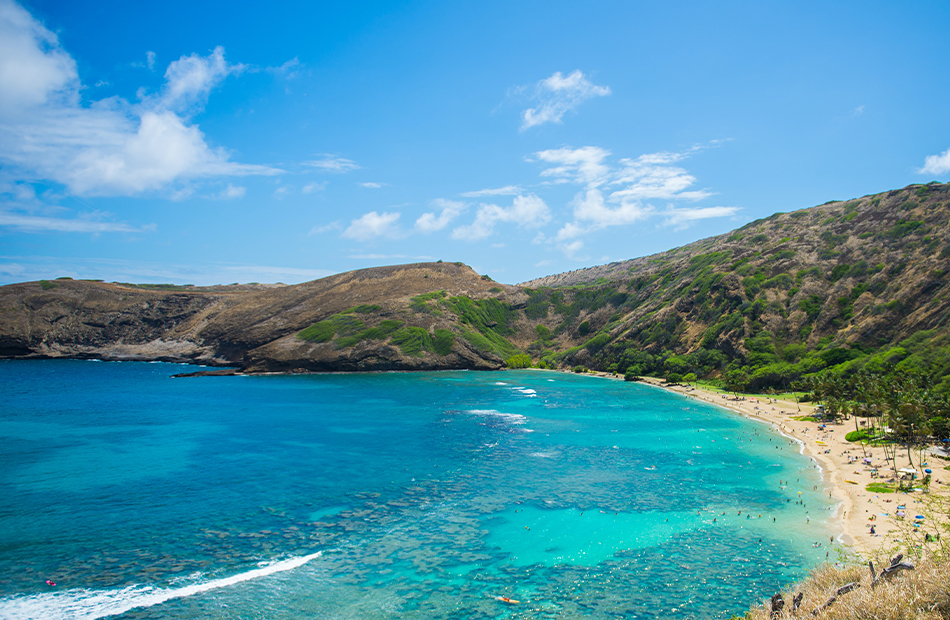 Hanauma Harbor is a rare natural bay developed within an ancient volcano's crater. It used to be such a famous snorkeling spot that it had been contaminated and destroyed due to overuse. The bay is now pure, and its environment thrives, thanks to restoration works that began in 1990, allowing visitors to truly appreciate the reef and its diverse creatures.

The number of daily visitors is limited to prevent damage to the fragile environment and preserve the bay for future generations, and all beachgoers must view an educational video about how to avoid destroying the reef and ecosystem they are about to enjoy. Visitors can also learn more by visiting the Hanauma Bay Education Center's exhibits, which include interactive displays.

The Doris Duke Foundation for Islamic Art's whole collection is on display at the Shangri-La museum, as a result of the benefactor's passion for Islamic design and artwork. Ceramic art, particularly tile work, makes up the majority of the collection, which includes medieval Persian specimens. The massive architectural elements commissioned for the museum in the 1930s, constructed by artists from Iran, India, and Morocco, are some of the most stunning examples.

Textiles, wood, glass, and decorative objects from Spain, the Middle East, India, and Asia are among the other works in the collection, which totals roughly 2,500 pieces.

The USS Missouri, sometimes known as "Mighty Mo," rose to prominence as the official site of the Japanese surrender, which marked the end of World War II. Visitors can select between two tours while the ship is docked at Pearl Harbor: the shorter tour includes a look at the captain's quarters and bridge, as well as an overview of the ship's history as guests are led along with the top decks.

The battleship's inner workings are explored during the longer, more in-depth tour. Visitors can not only look below deck into the engine room and other key stations, but they can also participate in hands-on activities such as lighting one of the ship's huge boilers or programming the archaic analog computers in the aft plotting room. Tourists may also observe how the crew members lived while at sea, from the galley to the sleeping cabins to amusement.

Those who can climb the 1,050 steps of the Koko Crater Railway Trail are rewarded richly with stunning vistas of Honolulu's waterfront. Because many of the steps are exceedingly tall and steep, and the path's only level portion is a bridge that spans a 40-foot drop, the "stairs" are actually railroad ties that were formerly used by a military tram that brought supplies and personnel to the lookout and bunkers during World War II. Visitors who are visiting for the first time can consider hiring a local guide, who will provide helpful hints on how to prepare for the journey as well as a narrative about the site's history.

If you don't feel like climbing, the Koko Crater Botanical Garden, which is accessible through a two-mile route that winds through sixty acres of endangered and uncommon species, is a terrific alternative.

Hawaii's official museum, the Bishop Museum, houses one of the state's best collections of Polynesian artwork and antiquities. Kalis, a collection of feathered royal standards that functioned as flags for prior monarchs, as well as Hawaiian feathered capes and helmets, are among the museum's permanent exhibits. The first floor of the museum is devoted to Kai kea, the world of Hawaiian tradition in where the ancient gods live.

Other sections of the museum are dedicated to the natural history of the region, including traditional occupations such as whaling. A huge collection of antiquities from the South Pacific, as well as things brought by early settlers such as the Japanese, Chinese, Filipino, Korean, Portuguese, German, and others, is also worth noting. The J. is also housed at the museum. Watumull Planetarium, which shows documentaries about dinosaurs and Polynesian culture, as well as shows about the Hawaiian night sky and other celestial topics.

The Asian Art collection of the Honolulu Museum of Art contains about half of the museum's 50,000 works, illustrating the extent to which Asian culture has affected Hawaii. This collection is primarily recognized for its representation of Japanese, Chinese, and Korean art, with over 23,000 artifacts. Hawaiian art, of course, is a significant feature of the museum's exhibits, featuring a diverse range of mediums reflecting Hawaiian artists from the 1700s to the present.

Around 18,000 works of European and American art, including sculpture and decorative arts, are on display at the museum. This includes works by Van Gogh, Cézanne, Rodin, and Monet, as well as a large collection of paintings by significant 19th-century European artists. The museum's antiquities collection, despite its tiny size, contains some exceptional examples of ancient Greek, Roman, and Egyptian artifacts dating back over 5,000 years.