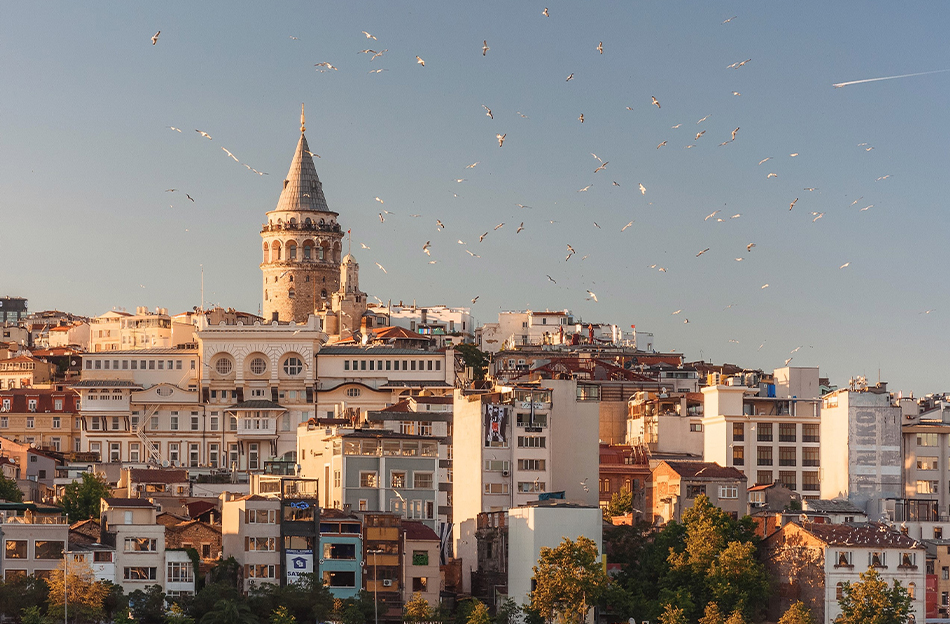 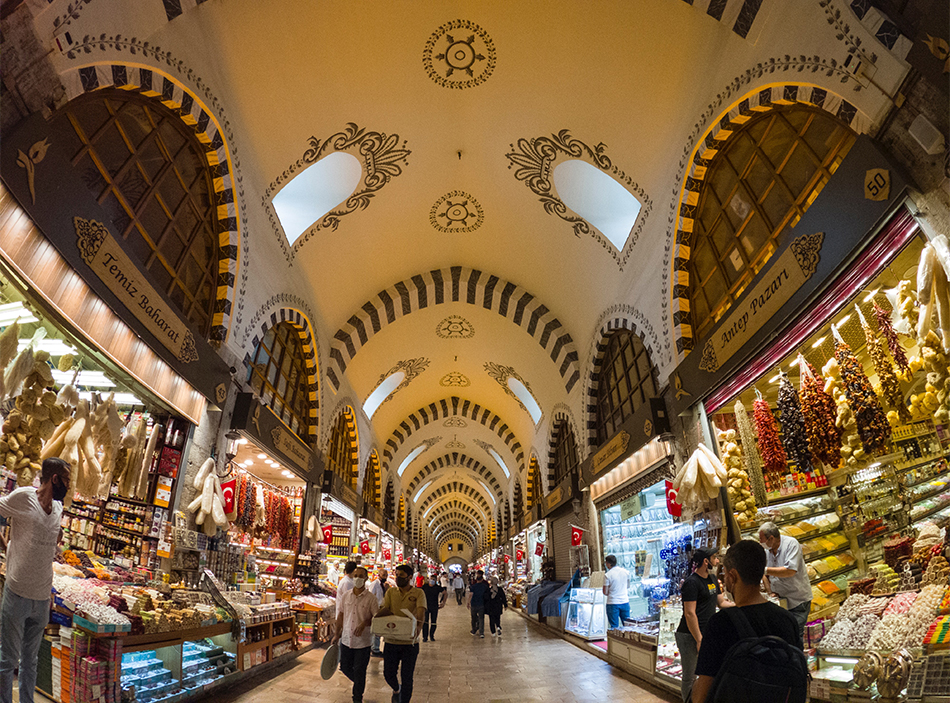 Istanbul's bright and bustling Spice Bazaar is a fascinating and fragrant place to visit. The spice-laden stalls and shops of the Fatih neighborhood, within walking distance of the Blue Mosque and Hagia Sophia, are one of the city's most famous and popular covered retail complexes.

The bazaar, which was built in the 1660s and now has over 85 shops lining its gorgeous indoor walkways, is a work of art. You may buy souvenirs and sweets here, in addition to a variety of colorful spices. Everything is for sale, from dried fruit and nuts to handcrafted jewelry and textiles. 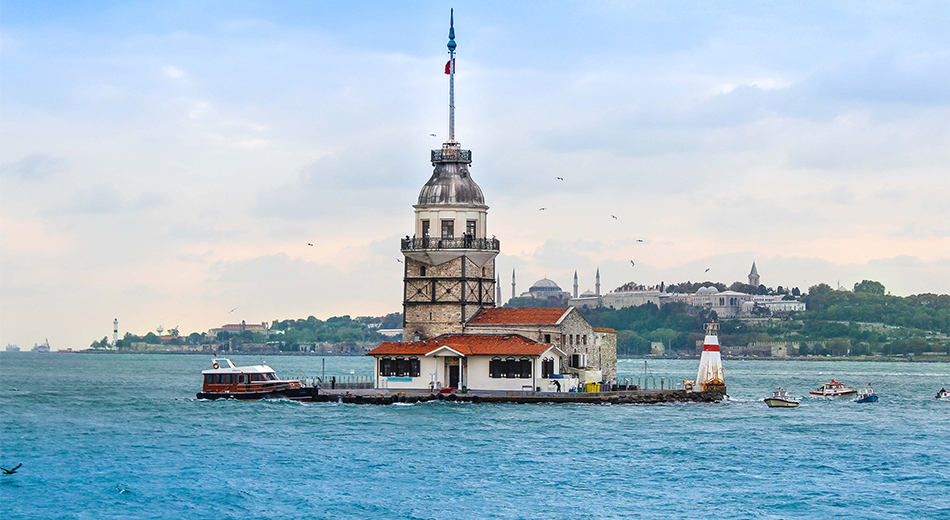 The old watchtower of Kz Kulesi, which stands on a little islet near the southern entrance to the Bosphorus Strait, is a remarkable sight. It features an observation deck and restaurant with amazing views of Istanbul, and it is known as the 'Maiden's Tower' in Turkish.

Surprisingly, a tower has stood on the isle for 2,500 years, with towers built by everyone from the Athenians and Romans to the Byzantines and Ottomans. It has served as a watchtower, lighthouse, and quarantine station over the ages, and has even appeared in films such as Hitman and The World is Not Enough.

Gülhane Park is one of Istanbul's largest and most beautiful parks, and it's immediately next to the city's most popular tourist destination, Topkapi Palace. Its beautiful grounds and gardens, which were once only available to the royal court, are a joy, with the park having some spectacular scenery and divine views over the Bosphorus.

Its leafy walks lead you past attractive flower beds and fountains, as well as lush green spaces and tree groves. It is popular with both locals and tourists. It also houses the Istanbul Museum of the History of Science and Technology in Islam, as well as the Sublime Porte, a magnificent rococo gate that previously opened to the palace's farthest courtyard. 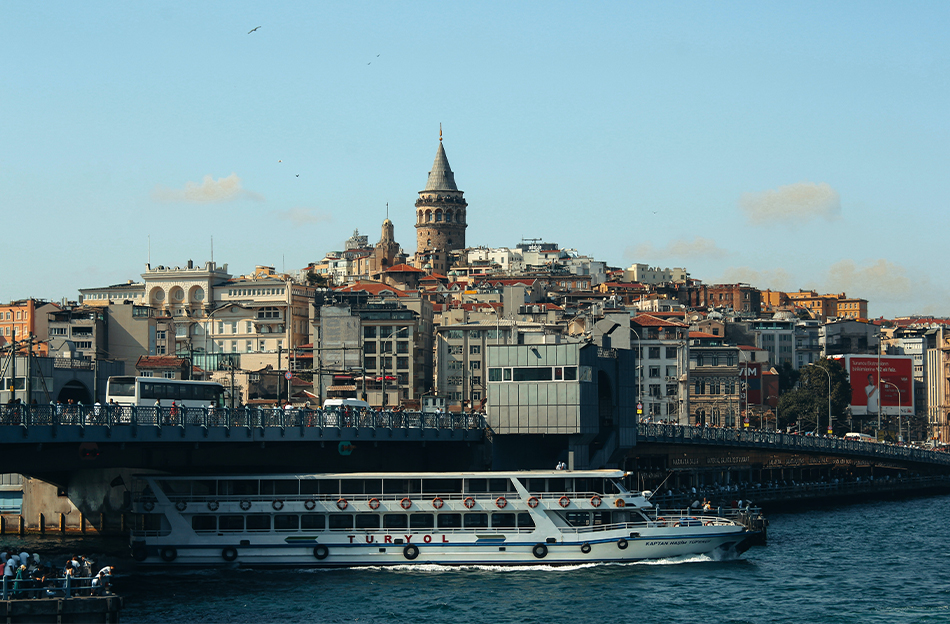 Galata Bridge, which spans the Golden Horn, is one of Istanbul's most well-known sights, having appeared in innumerable plays, poetry, paintings, and books throughout the years. It connects the city center to the imperial palace and other key institutions such as Hagia Sophia and the Blue Mosque and is the fifth bridge to exist in the same location.

The bridge, which is lined with fishermen, provides lovely views of the surrounding seas, as well as stores, restaurants, and nargile cafes beneath it. Galata Bridge is an atmospheric spot to visit and is highly bustling at practically all hours of the day, with seagulls shrieking overhead, boats moving below, and mosque spires visible atop the surrounding hills.

The Hippodrome, which is now a popular meeting spot and promenade, used to stage dramatic chariot racing, gladiator fights, and even political discussions. Despite the fact that hardly much of it survives, the area is still a delightful place to walk around, with some wonderful historical monuments and statues on display.

The Hippodrome was the epicenter of city activity for ages, lavishly ornamented with statues of emperors and gods, animals, and heroes. However, after the destruction of Constantinople in 1204, when most of the city's stone was taken away, it never fully recovered. The over 3,500-year-old Obelisk of Theodosius and the lovely German Fountain, which is flanked by the Blue Mosque, are now among the city's highlights. 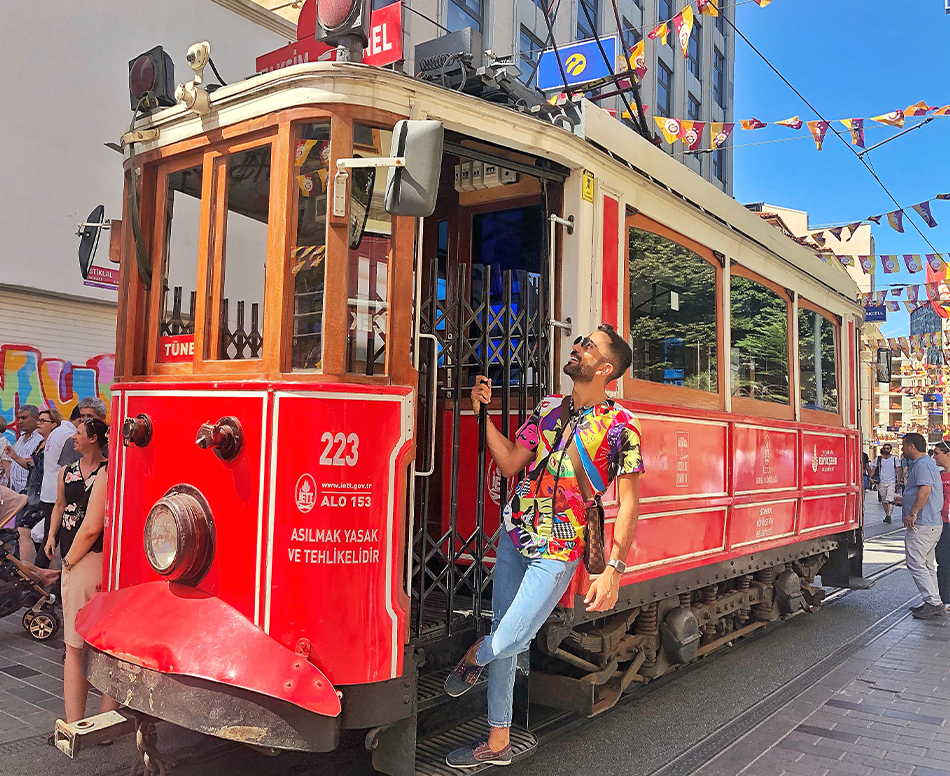 The enormous and busy Taksim Square, the heart of modern Istanbul, is located in the city's center, surrounded by innumerable shops and restaurants, hotels, and historic landmarks. It is not just a prominent tourist attraction and significant transportation hub, but it also accommodates a variety of public events, ranging from parades to protests.

It also includes the spectacular Republic Monument, which is framed by the large, majestic, and modern Taksim Mosque. Taksim is bordered on one side by the multi-purpose Ataturk Cultural Center, which organizes operas, plays, and concerts, and on the other side by a picturesque heritage tram line that meanders across the square. 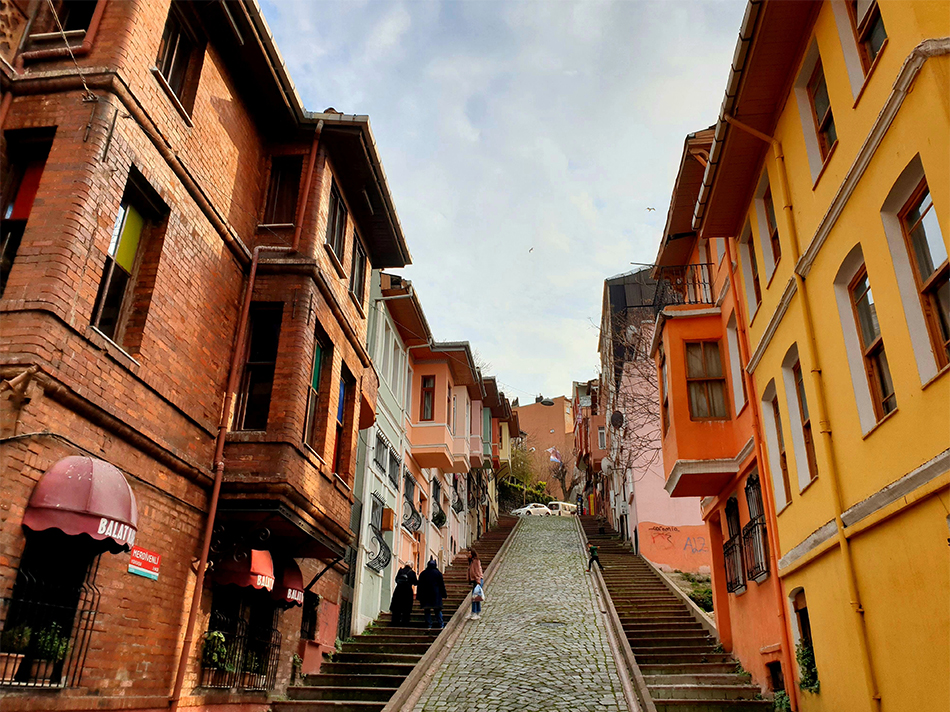 The winding cobblestone alleyways of Fener and Balat are a delight to explore, with stunning old buildings, vibrant businesses, gorgeous churches, and synagogues. The two historic neighborhoods, which are located on the European side of Istanbul and run beside the Golden Horn, are becoming increasingly popular with tourists due to their gorgeous streets and pleasant atmosphere.

The areas, which once had considerable Greek and Jewish populations, today feature a multitude of historic sites, including the Phanar Greek Orthodox College, Ahrida Synagogue, and Bulgarian Iron Church. Apart from admiring the beautiful architecture, you may also visit the outstanding local restaurants and cafes, as well as the numerous antique shops and bazaars. 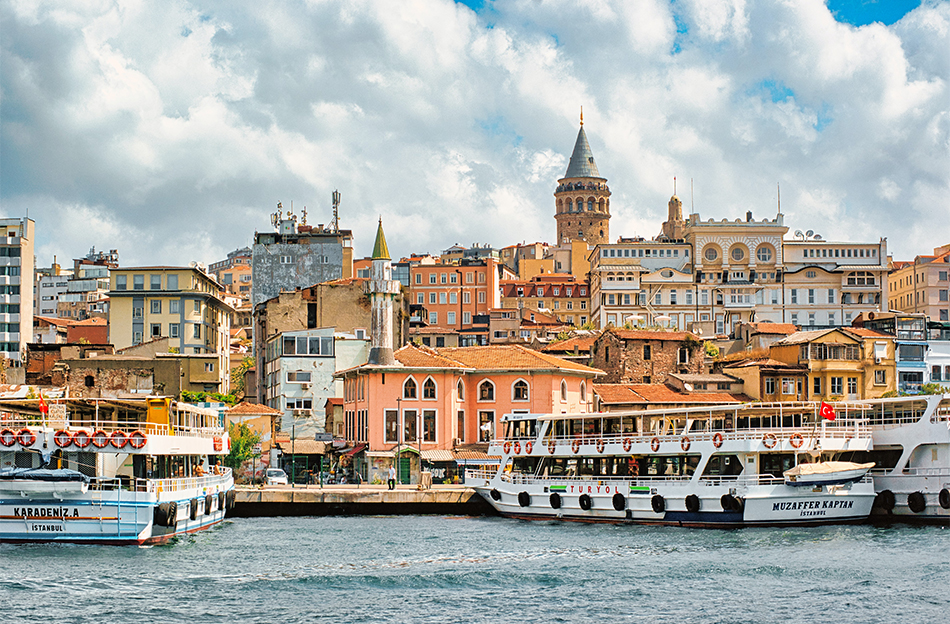 The Galata Tower, standing 67 meters (219 ft) tall, dominates the Istanbul skyline and provides spectacular views of the old city and its environs. When it was completed in 1348, the medieval stone tower known as the Tower of Christ was Istanbul's tallest edifice. It still towers tall over the city today.

The tower has been altered over the ages, and it was once utilized as a fire-spotting observation tower. Its upper floors now include a café, restaurant, and nightclub, all of which are accessible via elevator from the nine-story building's spectacular views.

Although the Chora Church is a little off the usual tourist road, travelers believe the exquisite Byzantine art is well worth the trip. The biography of Jesus and his mother, Mary, is depicted in magnificent mosaics and frescoes. It has been recognized as one of the most exquisite remaining masterpieces of Byzantine architecture, known as the Church of the Holy Savior in Chora.

The Chora, which dates back to the days of Constantine, was originally a monastery; it was transformed to a mosque a few centuries later, and then to a museum in 1948. 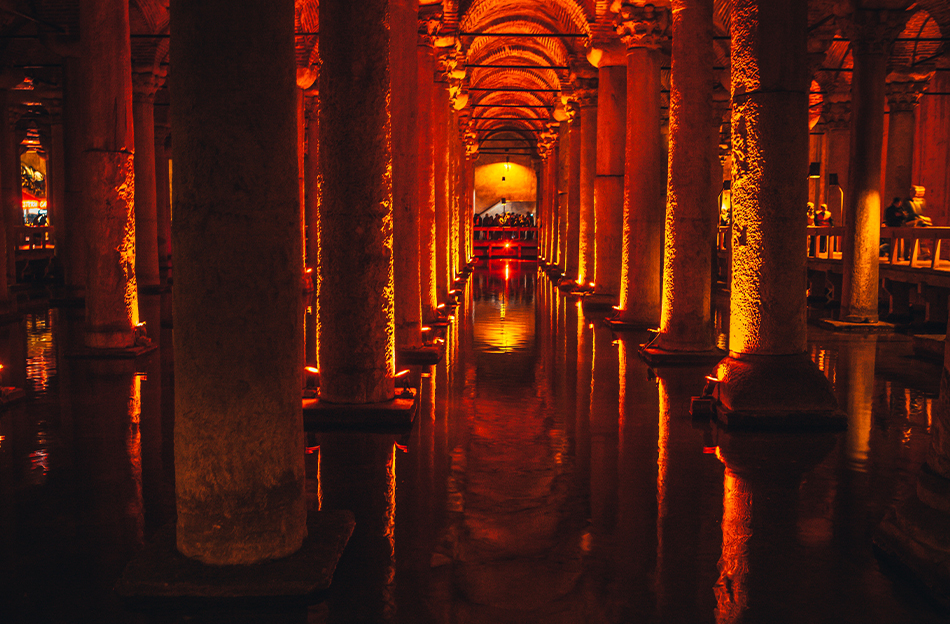 The Basilica Cistern has been giving water to Istanbul citizens since the sixth century when it was ordered erected by the Roman Emperor Justinian I. Visitors remark on the advanced technology utilized by the ancient Romans to construct this architectural marvel.

The underground cistern, which is only a few steps away from the Blue Mosque, was erected on the site of a third-century basilica. The cistern, known as the Sunken Palace, can hold 2.8 million cubic feet of water. The cistern was one of the locales in the 1963 James Bond blockbuster From Russia with Love.