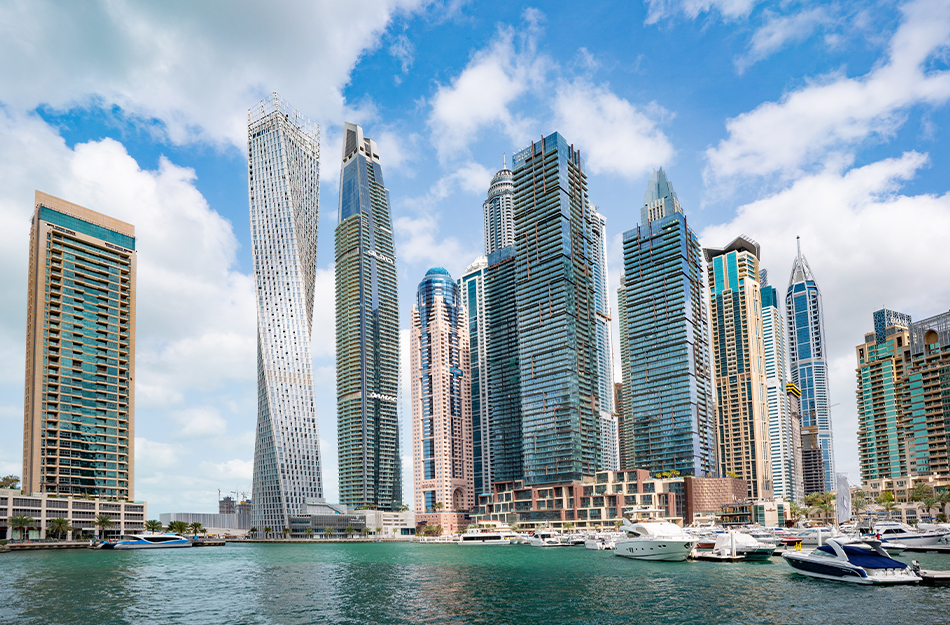 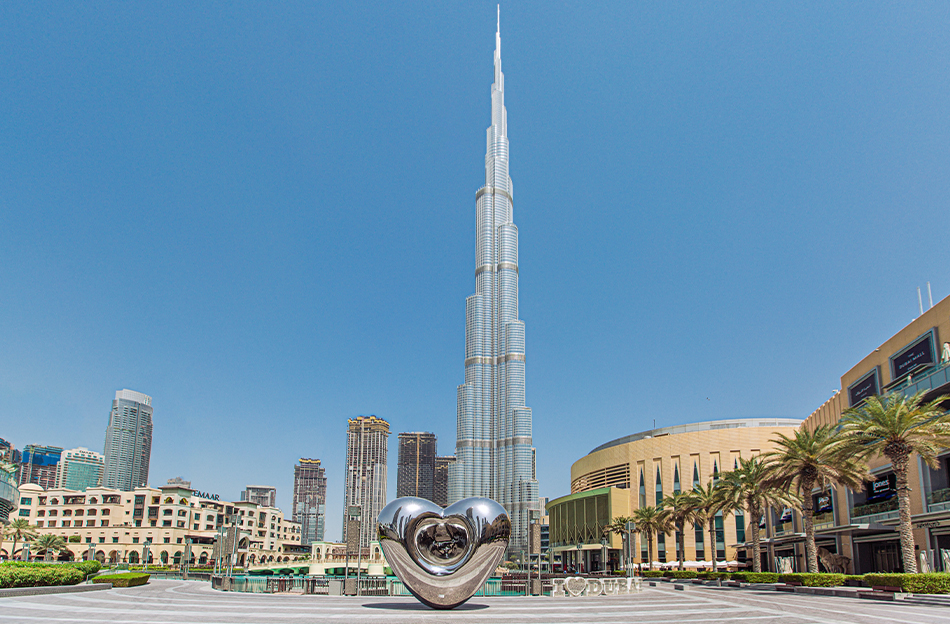 A visit to the building that has come to symbolize Dubai more than any other is a must on any Dubai sightseeing trip. The Burj Khalifa is the world's tallest freestanding tower, rising to an almost incredible height of 829.8 meters. A visit to the 124th-floor 'at the top' observation deck provides panoramic views that are just spectacular, as well as a multimedia experience that highlights some of the challenges faced during the massive construction process. Also, don't miss the lovely gardens that encircle the tower on the ground level.

The Dubai Aquarium, which houses 140 colorful kinds of fish and other sea life, is another must-see in Dubai. The main tank holds 10 million liters of water and has the world's largest collection of sand tiger sharks among hundreds of sharks and rays. The main huge tank (big enough for glass-bottomed boat trips on its surface) can be seen from the ground floor of Dubai Mall, but nothing quite compares to the exhilaration of going "inside" the tank oneself by entering the 148-meter-long walk-through tunnel. Cage snorkeling and shark diving are both available for the adrenaline enthusiast. 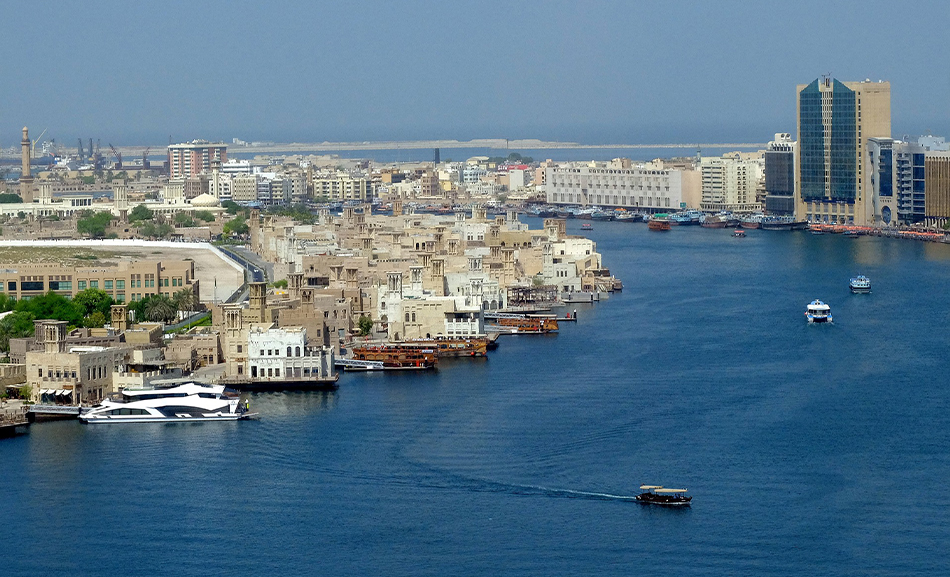 Dubai Creek, an old and modern component of Dubai, divides the city into Deira to the north and Bur Dubai to the south. The creek, which is where it all began in many respects, is a terrific site to get a feel for Dubai's historic atmosphere. Visit the dhow dock north of the Al-Maktoum Bridge to view vessels that are over a century old and are still providing a lifeline for tiny traders from all over the region – you might even be invited onboard! The Deira Twin Towers and National Bank are two notable structures while neighboring Dubai Creek Park is one of the Emirate's largest and a fantastic area for a peaceful picnic with old and new acquaintances. 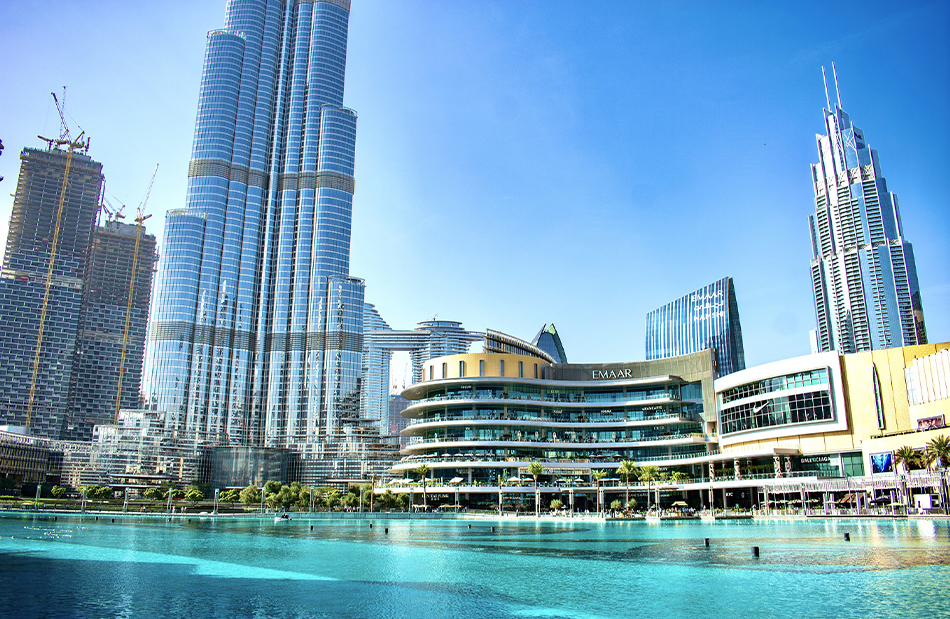 Dubai Mall is the city's flagship shopping mall and one of the greatest places to take the kids for day of shopping and indoor activities. It grants access to the Burj Khalifa and the Dubai Aquarium. If you're seeking extra amusement, there's also an ice rink, a gaming zone, and a movie complex. 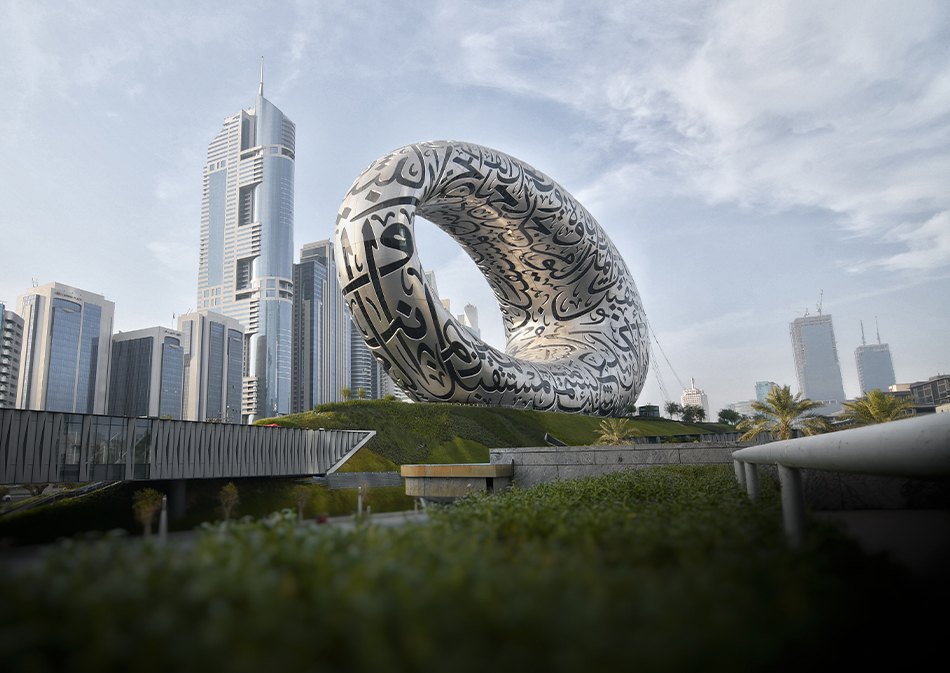 The Al-Fahidi Fort, which was erected to defend Dubai Creek in 1787, now houses Dubai's outstanding museum. Traditional coral blocks are used to construct the fort's walls, which are kept together with lime. The ceiling is made of palm fronds, clay, and plaster, and the upper level is supported by wooden poles.

An interesting collection of historical maps of the Emirates and Dubai greets visitors at the entrance, depicting the region's massive expansion following the oil boom. Several traditional boats and a palm-leaf house with an Emirati wind-tower may be found in the courtyard. Weaponry is on display in the right-hand hall, while Emirati musical instruments are on display in the left-hand hall.

Sheikh Saeed Al Maktoum, the current ruler's grandfather, was the ruler of Dubai from 1921 to 1958. His original home has been reconstructed and refurbished as a museum with beautiful Arabian architecture. It was demolished, but the current house was built adjacent to the original location, using carved teak doors, wooden lattice screens across the windows, and gypsum ventilation screens with floral and geometric designs to keep loyal to the original style.

Thirty rooms are arranged around a central courtyard, with a wind tower on top. The Dubai Museum of Historical Photographs and Documents has exhibits inside, including many amazing historical photographs of Dubai from 1948 to 1953. Photos of fishing, pearling, and boat building can be found in the museum's maritime department. 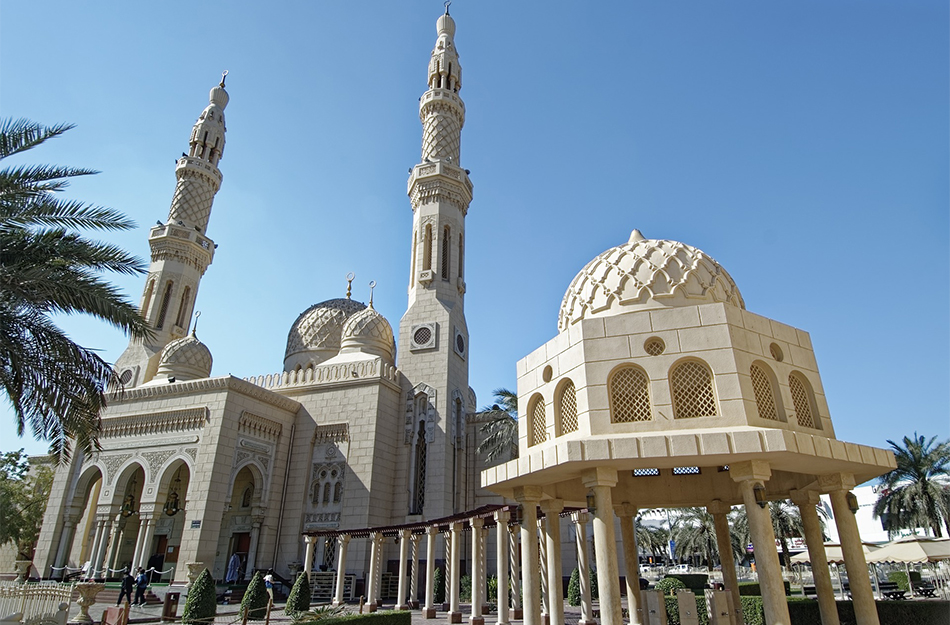 Many consider the Jumeirah Mosque to be the most beautiful of Dubai's mosques. The Jumeirah Mosque is an excellent example of Islamic architecture, as it is an identical replica of Cairo's Al-Azhar Mosque, which is eight times its size. With two minarets that display the fine features in the stonework, this stone edifice is created in the medieval Fatimid fashion. When lit with floodlights in the evening, it is quite appealing. 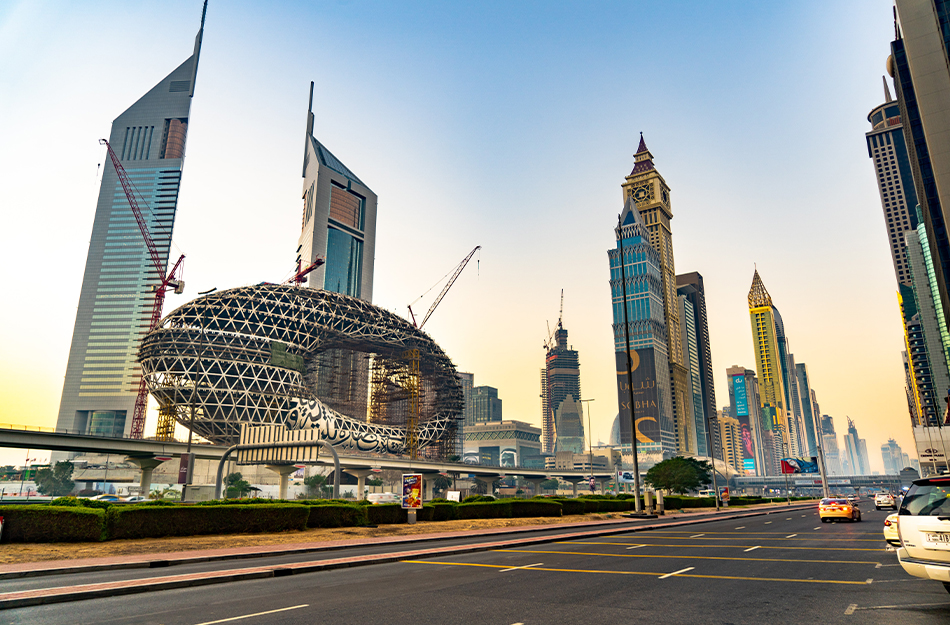 Sheikh Zayed Road is the main thoroughfare in Dubai's new downtown commercial district. This enormous, eight-lane highway is surrounded on all sides by towering glass, chrome, and steel high-rises. It's one of the nicest views of Dubai's famed buildings from the ground. The majority of Dubai's notable malls are located along or just off the strip between the roundabout and the first intersection, as are the majority of the city's major attractions.

The top floor of the Dubai World Trade Tower has a panoramic observation deck (a less expensive option than the Burj Khalifa), while the Gold and Diamond Park (Sheikh Zayed Road) is a one-stop-shop for jewelry connoisseurs, with 118 makers and 30 merchants all under one roof. 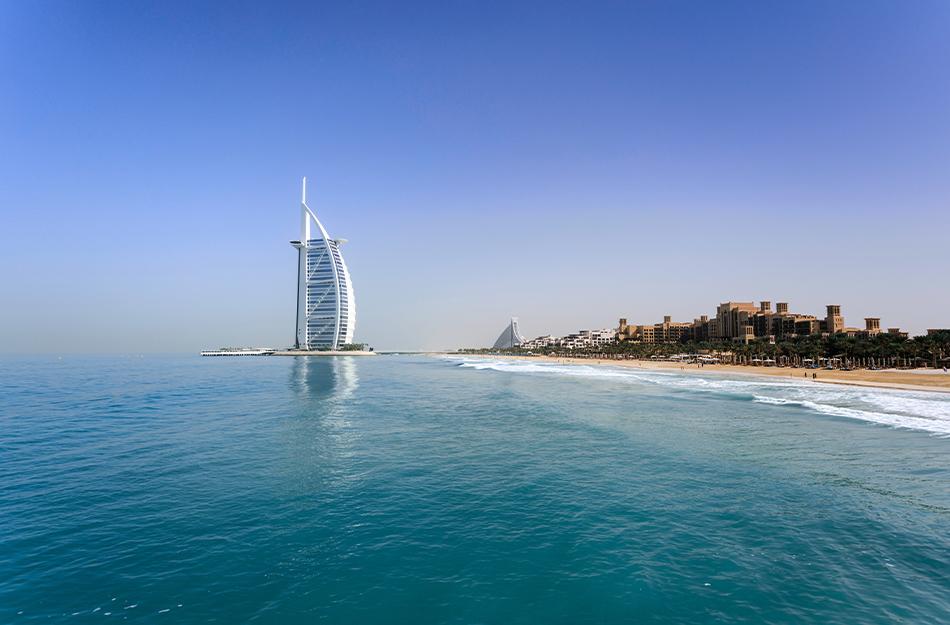 The Burj Al-Arab, rising 321 meters tall on its own manmade island off the coast of Dubai, is the world's highest hotel. At night, a coordinated, colored lighting show illuminates the exterior of the building, which is designed to mimic a billowing dhow sail.

The Burj Al-Arab is one of the world's most costly hotels, with the most luxurious suites costing more than $15,000 for a single night. For those without unlimited credit, dinner at the undersea Al-Mahara restaurant, whose floor-to-ceiling glass panels in the dining room walls allow you to watch sea life while you eat, or lunch at California-style fusion cuisine Scape, are the best ways to experience the over-the-top extravagance.

Look no farther for nocturnal entertainment. Dubai's beautiful new opera complex, which opened in mid-2016 and is slated to become the city's major cultural center and principal entertainment facility, is the centerpiece of the waterfront Opera District in downtown Dubai.

The Dubai Opera presents a year-round schedule of well-known musical theater plays, world-class performers' concerts, opera, ballet, and classical music, as well as smaller shows, comedy evenings, and concerts. With its highly-contemporary glass and steel walls jutting out over the waterfront, meant to evoke the curves of a traditional dhow, the 2,000-seat theater structure is an extraordinary piece of architectural genius and one of Dubai's new monuments.