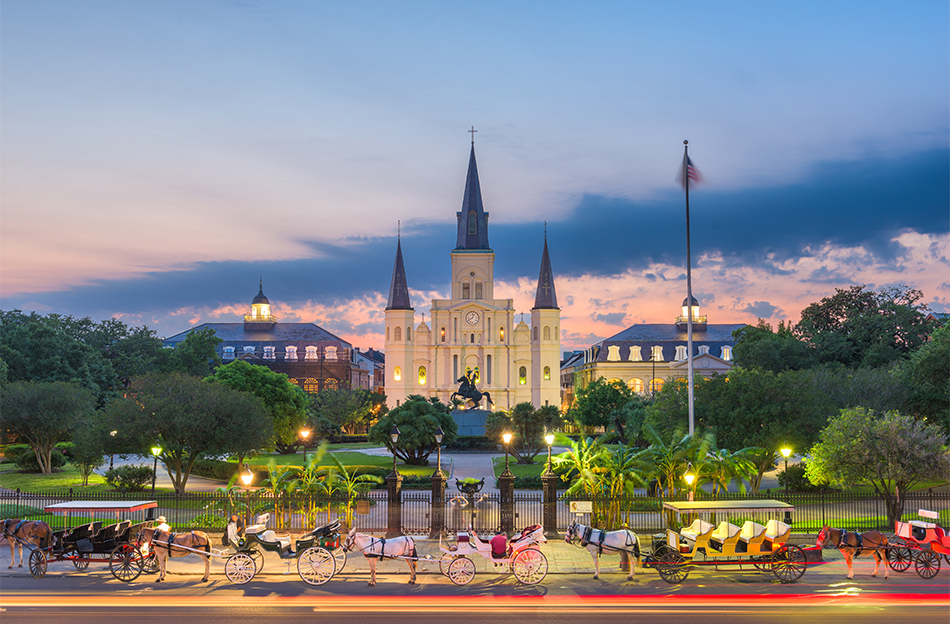 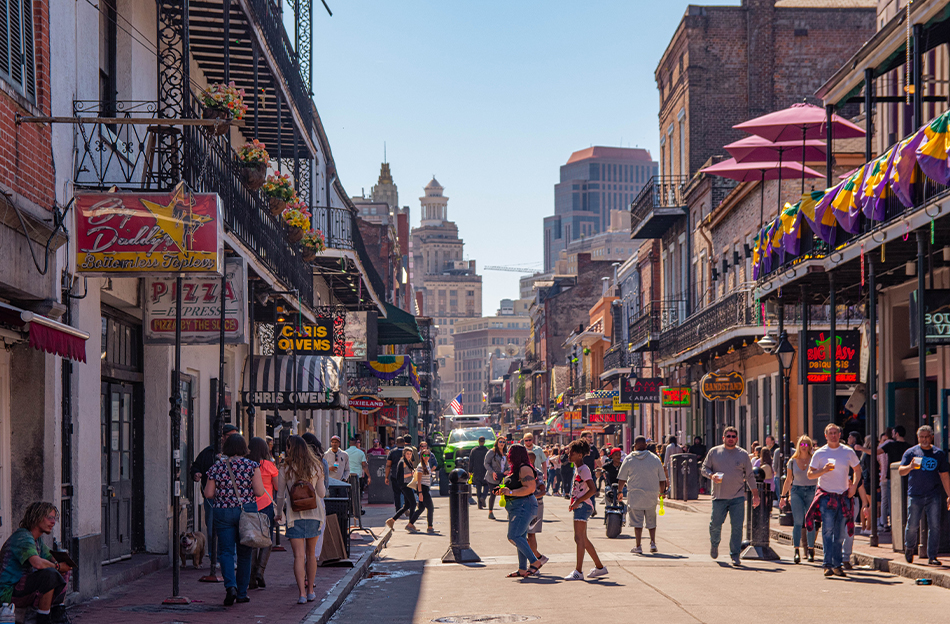 Mardi Gras is New Orleans' most famous event, with festivities lasting two weeks and culminating on Shrove Tuesday, the day before Ash Wednesday.

Parades are held virtually every day, as well as various forms of entertainment and festivities, which intensify as the event approaches its conclusion. Onlookers gather the balconies and walkways to witness the parades and grab beaded necklaces thrown from the extravagantly painted floats.

Bourbon Street is one of the most popular gathering spots, although the entire French Quarter is usually filled. The custom was brought to the city by French settlers and grew in popularity by the end of the nineteenth century. 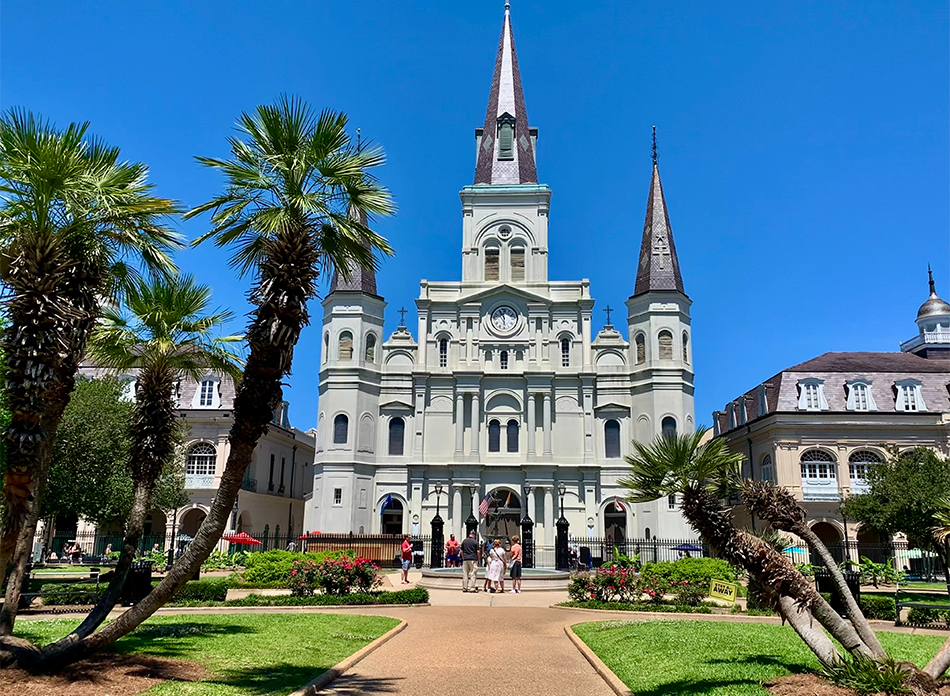 The main square in the heart of the French Quarter is Jackson Square, historically known as Place d'Armes. The space is centred around an equestrian statue of General Andrew Jackson, which is surrounded by trees and plants.

At one end of the Piazza, the renowned St. Louis Cathedral, with its white façade and cone-shaped towers, rises prominently. Near the cathedral are the Louisiana State Museums of the Presbytere and Cabildo.

Artists have traditionally congregated in front of the cathedral, along the iron fence that encircles the square, and there are shops and restaurants nearby, making it a popular tourist destination.

The Riverboat Docks, Moon Walk promenade, and Millhouse, as well as a variety of stores, make up the Riverwalk District. 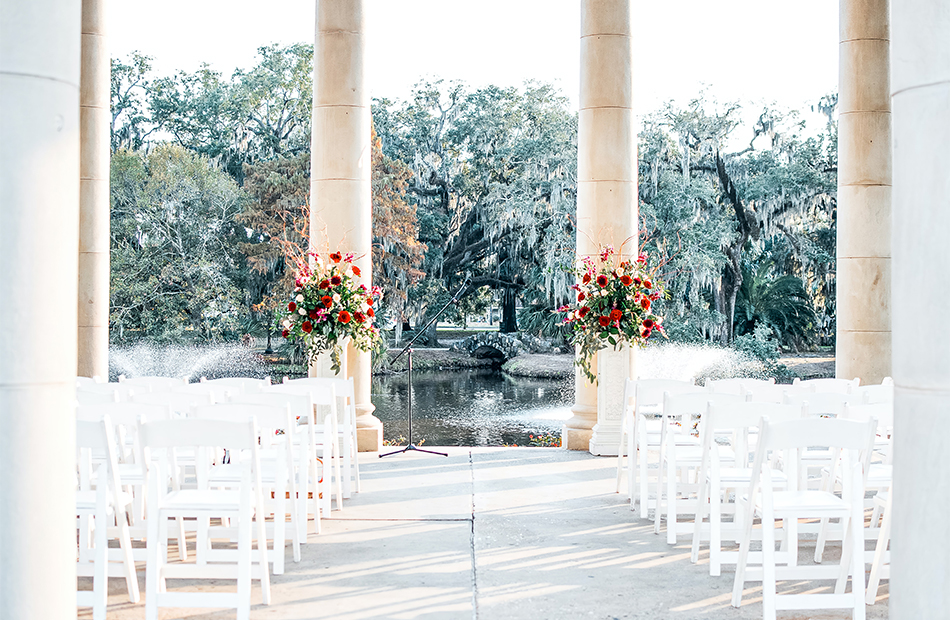 Children and families will enjoy Carousel Gardens Amusement Park, Storyland, and the soon-to-be-added City Splash water park, which is still under development.

On-site amenities include tennis facilities and an 18-hole golf course, as well as fantastic walking spaces. The park is home to one of the world's largest stands of mature live oak trees, including one that is over 800 years old.

4. Louisiana State Museum at the Cabildo

The Spanish governor's residence, the Cabildo, was built in 1795 to the left of St. Louis Cathedral. It is notable both as a historic edifice and as a museum with a unique collection.

In 1803 the Louisiana Purchase was agreed upon, and in 1799 the first municipal council met here. The Louisiana State Museum is presently housed in the Cabildo, which was originally home to the Louisiana Supreme Court and is listed on the National Register of Historic Places.

The museum's collections are primarily focused on New Orleans and Louisiana history, particularly the people of Louisiana and the numerous ethnic groups that currently make up the city.

The Garden Zone is an affluent residential district with lovely houses, large trees, and lush gardens that many outsiders associate with the Deep South.

The area is easily explored on foot, and some businesses provide guided tours that are a great way to learn about the region's history and see the sights. On First Street, Camp Street, and Prytania Street, you'll find large, magnificent 19th-century mansions with expansive yards.

A lot of well-known celebrities call this location home. The bulk of visitors come to relax and view the homes, but there are also boutiques and coffee shops in the area; nevertheless, they are spread out, making choosing a lunch site more difficult than anticipated.

The World's Industrial and Cotton Centennial Exposition of 1884 was the inspiration for Audubon Park, which is located southwest of the Garden District in Uptown New Orleans. This is a long way from the French Quarter, but it's a great incentive to go.

One of the park's highlights is the Audubon Zoo. This is a nice break from the hustle and bustle of the city, with lush grounds and a good selection of domestic and exotic animals. Some of the zoo's most popular residents include giraffes, jaguars, leopards, orangutans, elephants, rhinos, lemurs, and alligators (including the rare white alligator).

The Audubon Golf Club, a butterfly garden and insectarium, hothouses, a number of small lakes, and plenty of open green space may all be found within Audubon Park.

A cruise on the paddle steamer Steamboat Natchez is a fantastic way to view and learn about the city while also experiencing the Mississippi River.

The harbor tours last about two hours and include a narration of the sights as well as an optional creole cuisine lunch. A live jazz band performs during the dinner cruise, as well as a buffet-style dinner and, of course, spectacular views of New Orleans.

It's a good idea to schedule a Steamboat Natchez Harbor Cruise in advance, especially during peak season. This tour ensures a spot on the boat as well as the best costs.

New Orleans is known around the world for its grandiose Mardi Gras celebrations, which attract visitors from all over the world to take part in the festivities that take over the city during this time.

Visitors can join a Mardi Gras World tour to view operating studios to get a sense of what goes on behind the scenes of this massive event. The Blaine Kern Studios is one of the world's major float producers, and it is heavily involved in the annual Mardi Gras Parade in New Orleans.

Sculpted props, massive floats, outlandish costumes, and a variety of figures may all be seen. This is a fantastic way to get a feel of the scale, color, and creativity that goes into the floats and procession. Every day, guided tours of the workshops where artists and sculptors work are available.

9. Audubon Aquarium of the Americas 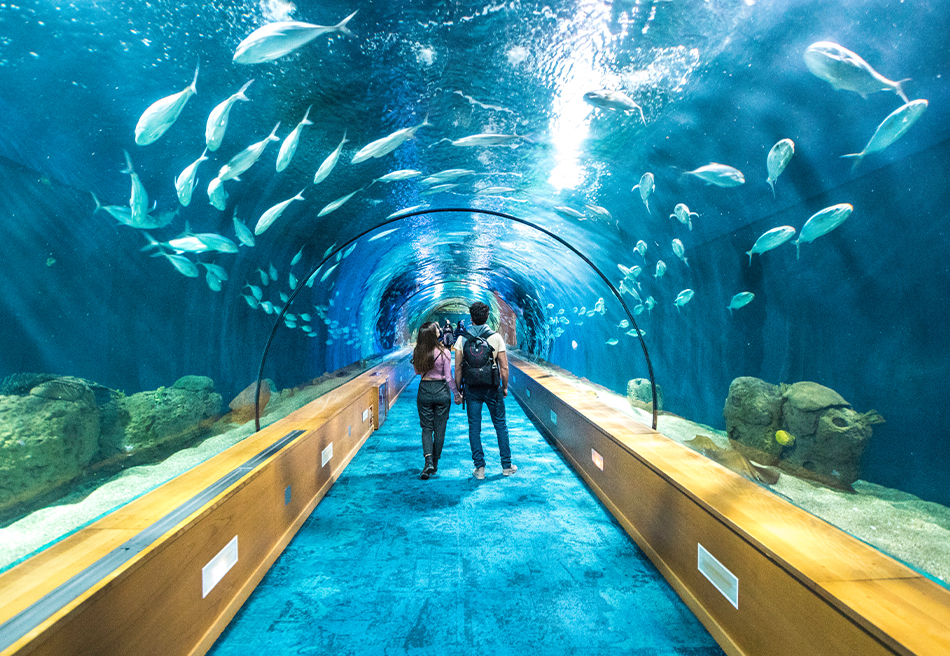 The aquarium, located on the waterfront in downtown New Orleans and within walking distance of the French Quarter, concentrates on North, Central, and South American species. Over 3,600 animals from over 250 species make up the museum's outstanding collection.

Visitors can learn about organisms that hide beneath the surface of local surrounding waters starting in the north, with exhibits highlighting freshwater fish from the Mississippi River and marine life from the Gulf of Mexico. Sharks, stingrays, and marine turtles all fall into this category.

The sea otters and penguins, as well as the wildlife interaction programs, are always popular. Hands-on interactions with African penguins and a chance to SCUBA dive or swim the Great Maya Reef are available as optional extras. 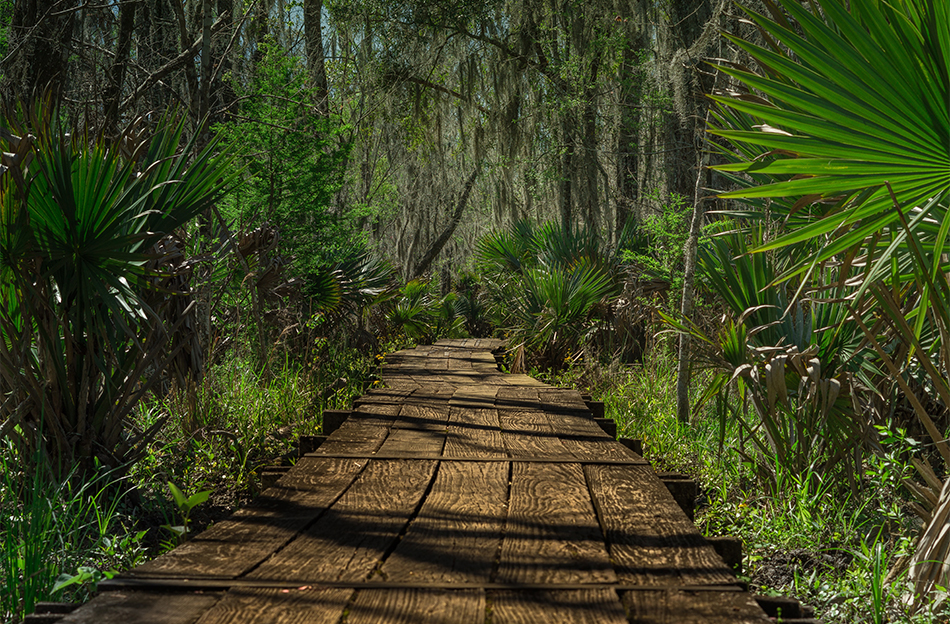 The Jean Lafitte National Historical Park and Preserve is made up of six physically separate sites in southern Louisiana.

New Orleans is home to two of these attractions, both of which are highly worth seeing. Visitors to the Barataria Preserve will be able to explore some of Louisiana's natural beauties.

The preserve is made mainly of natural levee woods, bayous, swamps, and marshes. At archeological sites in the area, relics of the ancient Troyville, Marksville, and Tchefuncte cultures have been uncovered.

The Battle of New Orleans was fought on January 8, 1815, at the Chalmette Battlefield, and was a major American victory over the British at the end of the War of 1812.