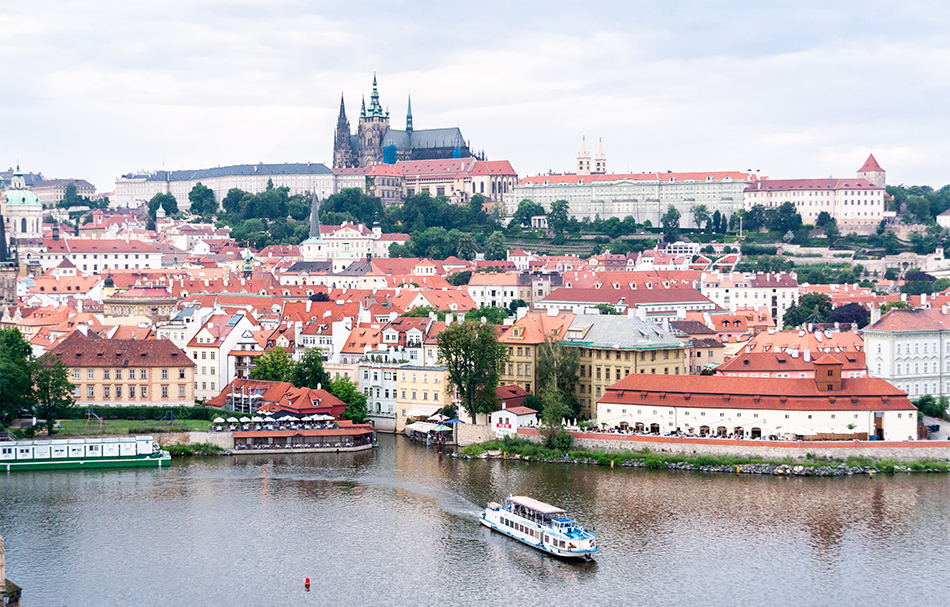 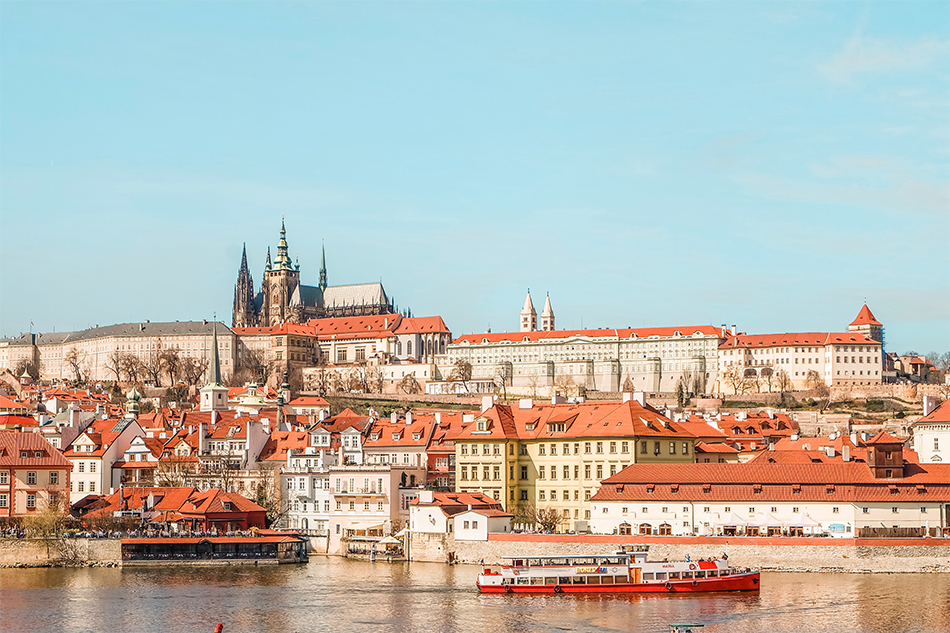 Prague is full of architectural wonders, with Baroque palaces and Gothic cathedrals coexisting alongside Cubist and Art Nouveau structures. The Dancing House in Prague is a tribute to modern steel and glass design, and its 600-year-old astronomical clock is one of Old Town's most beautiful landmarks.

The ancient Charles Bridge Tower and the Old Town Hall Tower, which tower over the central plaza and offer views of red rooftops and the primary Christmas market in the winter, provide some of the best views of Prague. According to Guinness World Records, there's also the view from Prague Castle, which was built in the 9th century and is the world's largest castle complex.

Prague is a cultural and historical hotspot with over 100 museums, including one dedicated to local author Franz Kafka, the National Museum, over 14 million artifacts, and the more peculiar Museum of Communism. You could also visit the Strahov Library, which was built in the 12th century and is considered one of the most beautiful libraries in the world. 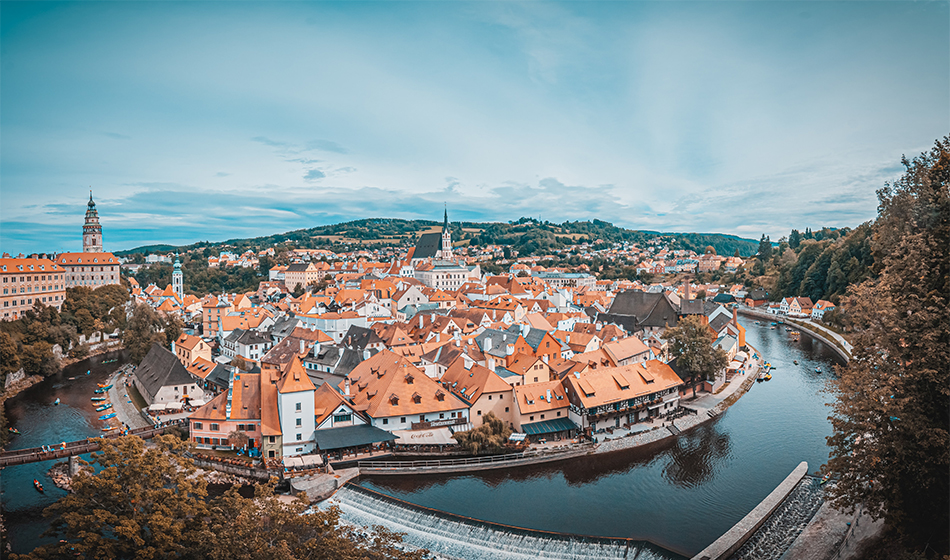 Český Krumlov is a smaller, more intimate version of Prague and a perfect place to explore the Czech Republic's south. Walking around the city's Old Town, with its cobblestone lanes and artisan shops, is a fantastic way to see the sights.

The castle in esk Krumlov is a UNESCO World Cultural Heritage Site and one of the town's highlights, although the castle tower and its amazing views draw the most people.

The only Baroque theater in the Czech Republic is located here. It was constructed in 1682 and still has its original mechanical stage parts and embellishments. Tickets are hard to come by, as there are only two public performances each year.

In the summer, tourists flock to esk Krumlov for water activities such as rafting and tubing down the Vltava River.

Karlovy Vary has been a spa town since the 19th century, and it is home to several hot springs that are said to have healing effects. There are numerous spas and health establishments in this area, offering everything from traditional massages to cupping and curative baths.

Karlovy Vary's colorful neo-Baroque and neo-Renaissance buildings give the city a distinct architectural style unlike anywhere else in the Czech Republic. With the spectacular mill colonnade (which houses five of the city's largest hot springs), Karlovy Vary is a photographer's dream.

Every summer, the Karlovy Vary International Film Festival, held in the Czech Republic since 1946, draws Hollywood stars and over 100,000 moviegoers. Over 200 films from around the world are included in the five-day festival. 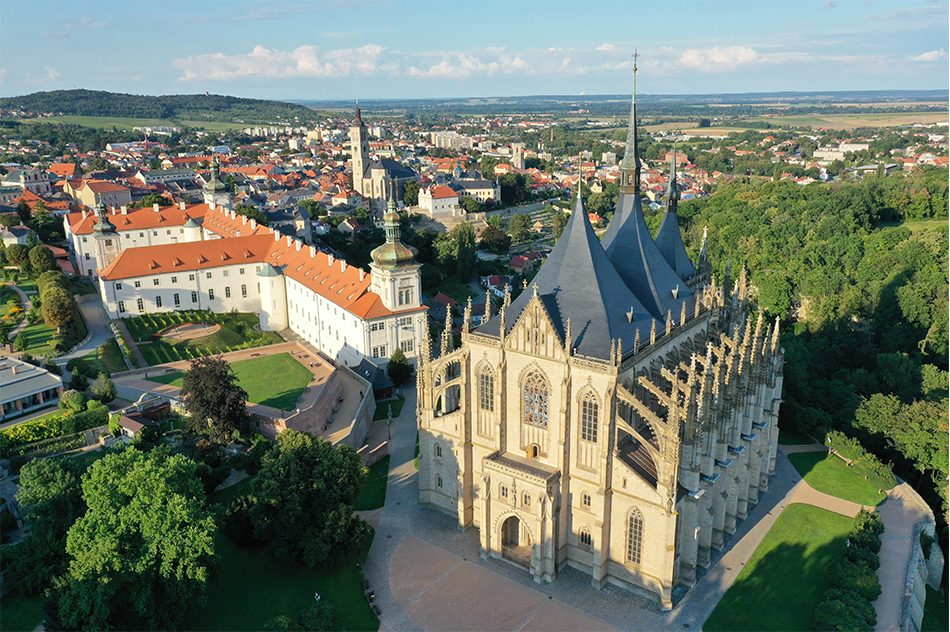 The Sedlec Ossuary, a Baroque chapel ornamented with the bones of approximately 40,000 persons who died during the Black Death and Hussite Wars in the 14th and 15th centuries, attracts most visitors to Kutna Hora.

Kutna Hora, formerly a thriving silver mining and processing center, now houses a few historic sites that commemorate the city's regal past. Visitors can go below in a medieval mine or visit a mining museum that depicts miners' lives from the 17th to 19th century.

Following a guided tour, visit the palace's cellar for a one-of-a-kind exhibition on Kutna Hora's dark side, including medieval criminal records, cases of witches and arsonists, and interrogation and torture tools. 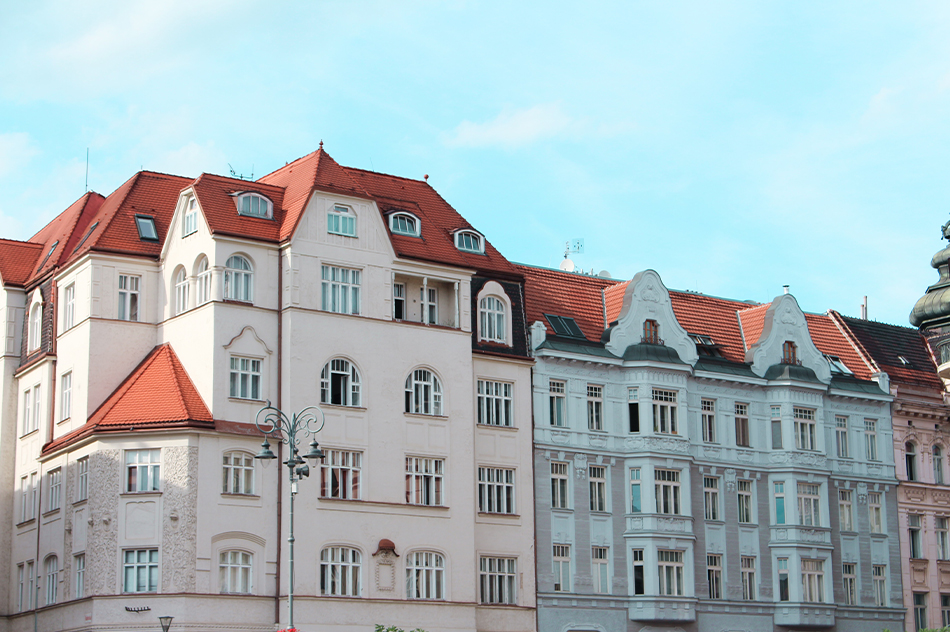 The towering Cathedral of St. Peter and Paul dominates Brno's city center, providing an excellent starting place for exploring the Old Town and its spectacular Gothic and early Baroque buildings.

While Brno cannot match Prague in terms of museum density, the city does have some distinct attractions. Visit the Romani Culture Museum, tour the 10-Z nuclear shelter underground, or visit the Brno City Museum inside Pilberk Castle.

Brno is also home to Europe's second-largest ossuary, which is located beneath the Church of St. James and the "Labyrinth under Vegetable Market," a famous system of underground tunnels and cellars. 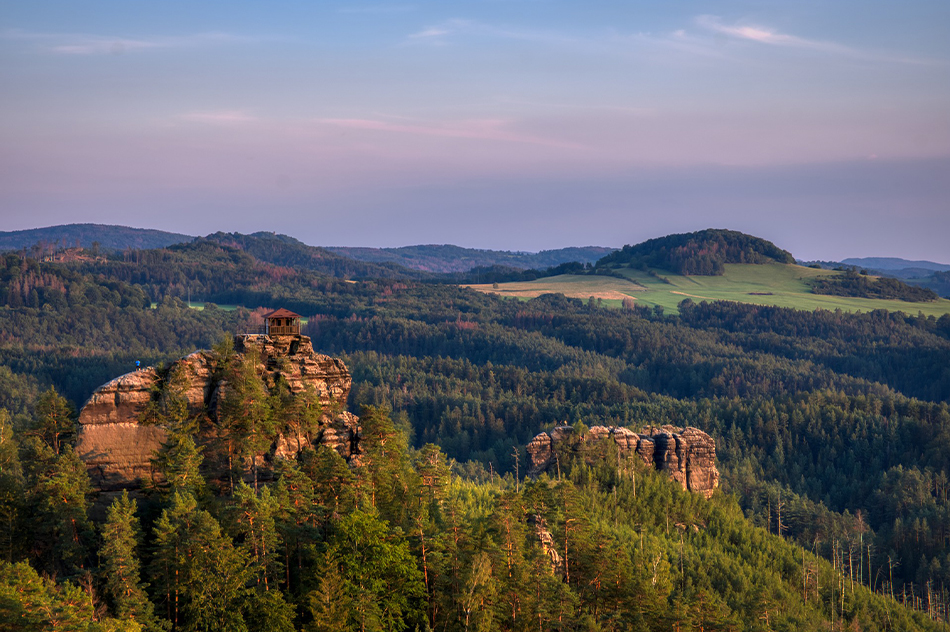 Bohemian Switzerland is one of the most beautiful natural attractions in the country, with sandstone mountains, rock labyrinths, and deep valleys and ravines. Pravická brána, Europe's largest sandstone rock arch at 16 meters tall and about 27 meters wide, is the park's most prominent feature.

The park borders Germany's Saxon Switzerland National Park, and routes are crisscross between the two countries for the ultimate hike.

The Kamenice River gorges, where a ferryman will row you through tight sandstone passageways adjacent to waterfalls, are other significant attractions in Bohemian Switzerland National Park. 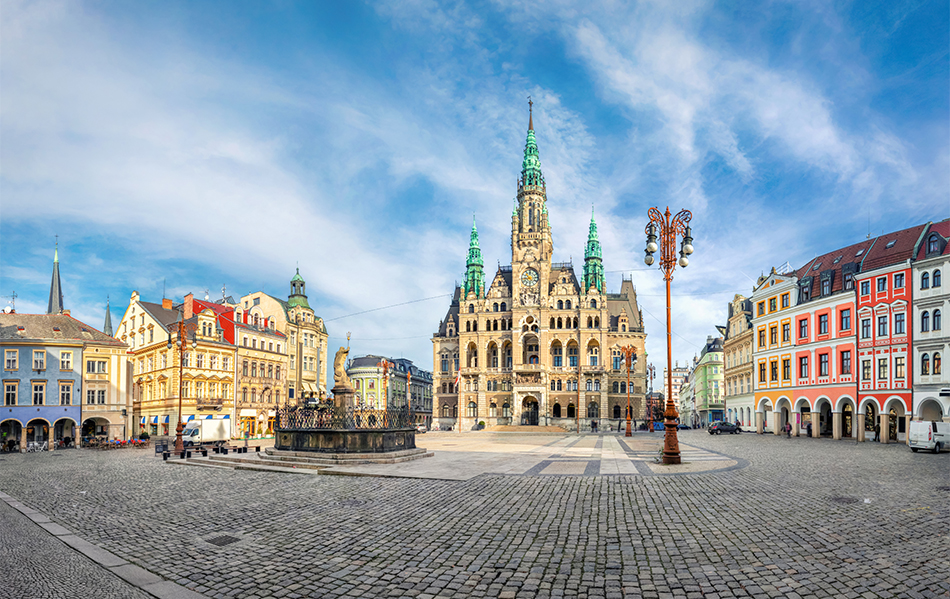 The 94-meter-tall Jetd Tower, which rises atop its eponymous mountain, is the city's most prominent feature. The concrete tower was built to serve as a TV transmitter, but it now serves as a hotel and restaurant as well.

Hiking up to the tower is an option for more adventurous guests, but a cable car ride to the top of the hill is also available. You'll be rewarded with breathtaking open vistas of the Lusatian Mountains once you arrive. The hills surrounding the tower are transformed into almost nine kilometers of ski and snowboard slopes in the winter. 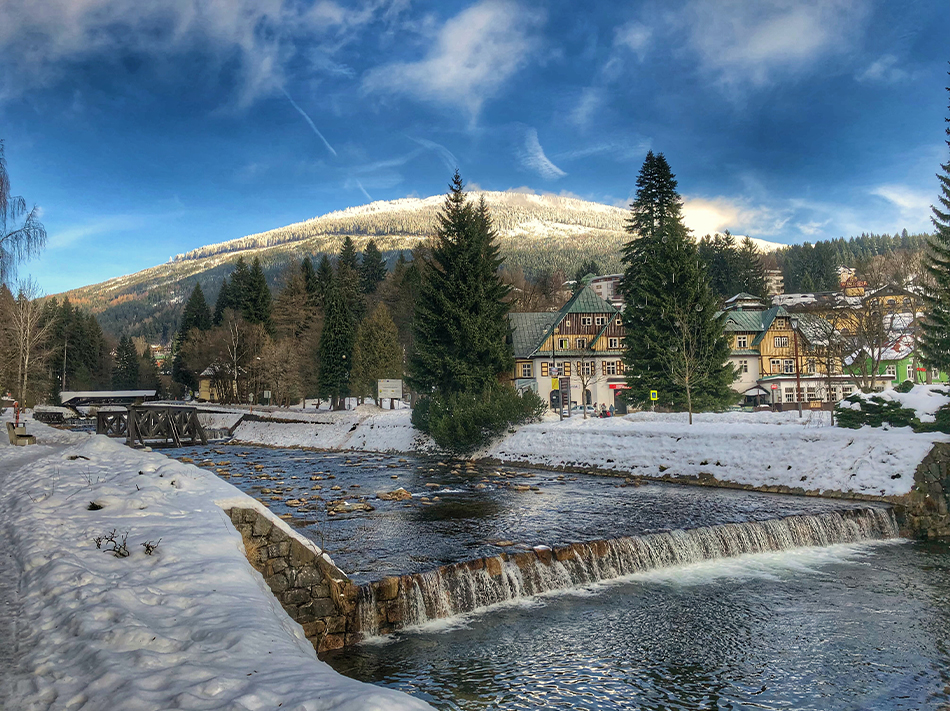 Located near the Krkonoe mountains and national park, Pindlerv Mln is a ski resort in the winter and a hiker's paradise the rest of the year. With 11 ski lifts and 25 ski slopes for all ability levels, Pindlerv Mln is the country's major winter sports center. Cross-country skiing, snow tubing, snowboarding, and ice climbing options for non-skiers.

Summer tourists can experience a 120-meter zipline above the Labská dam, explore the cycling lanes (the longest route is 71 kilometers long and connects Harrachov and Aclé towns), or hike the area's hundreds of kilometers of trails. 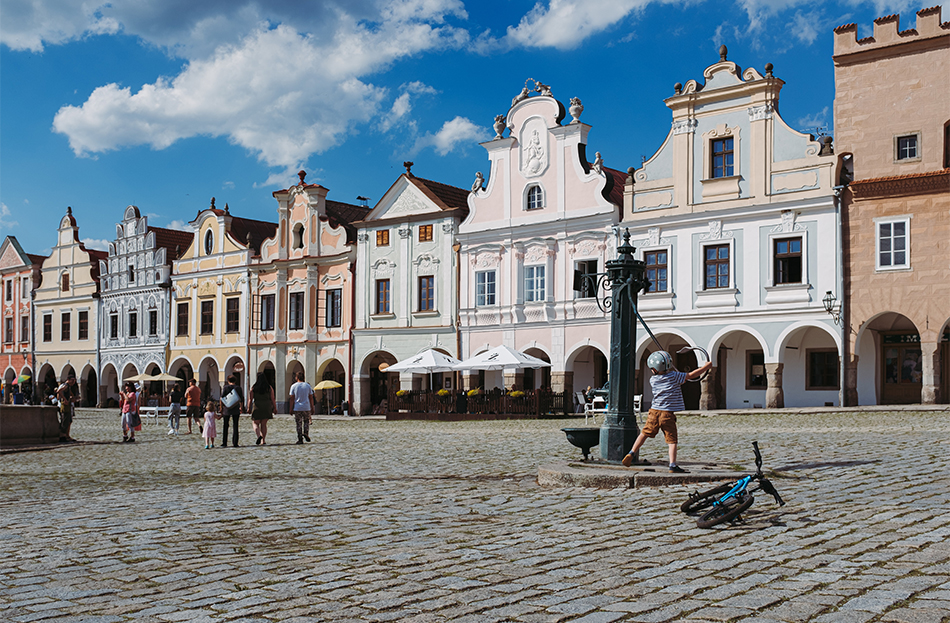 Tel is most known for its town square, a UNESCO World Heritage Site. The plaza is lined by a colorful combination of Renaissance and Baroque homes with towering gables and sgraffito.

Tel was formerly a fortified medieval water castle with moats and gates. While none of this remains now, the château at the end of the plaza is still surrounded by fishponds. The chateau is located on the site of the ancient Gothic castle and may only be visited on a guided tour. Within the palace grounds are a local history museum and a beautiful chapel.

Returning to the square, travelers can climb the adjoining Holy Ghost Church's tower for spectacular views of the fairy-tale rooftops. The 34-meter-high steel Oslednice lookout tower on the outskirts of town offers not only a picture of the city but also of the roof of Rotejn Castle in the distance, providing an even more spectacular panorama of Tel. 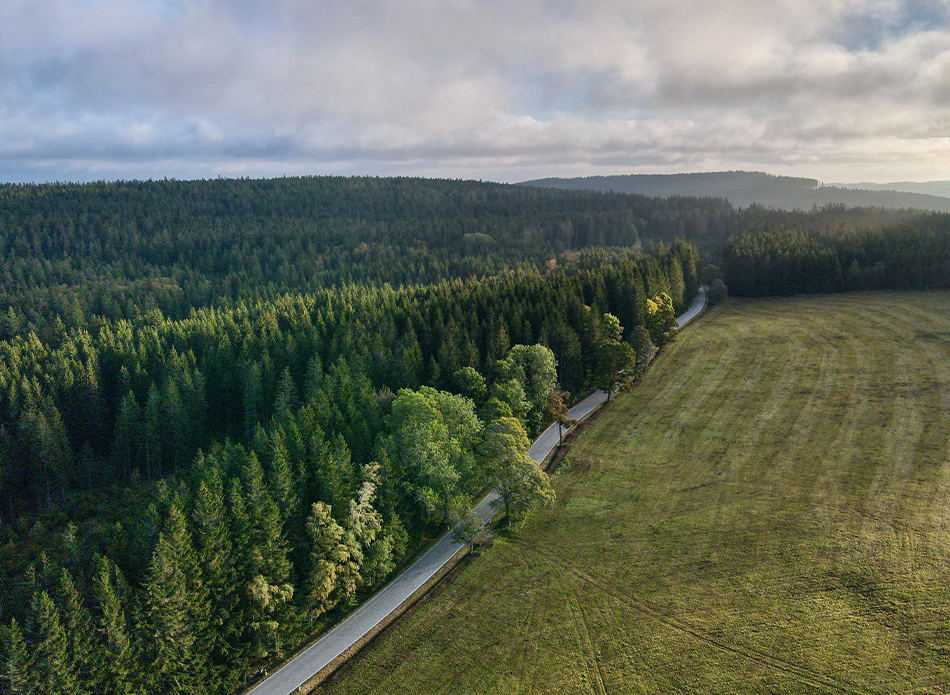 The most significant ancient woodland region on the continent is in Šumava National Park. With glacial lakes, lush green mountains, and rising peat bogs, the park is a UNESCO Biosphere Reserve that is primarily natural and undisturbed. As a result, hiking here is a one-of-a-kind experience, whether on woodland trails or to the lookout tower at the summit of Poledník mountain.

Šumava is a 680 square kilometer park with hiking, cycling, and cross-country skiing trails. Kašperk Castle and Černé zero, the country's deepest natural lake, are just outside the park's borders.